13 Reasons Why There’s Hope: God Calls You His Child

A parent’s love is unconditional; this is something we see repeated consistently in the Bible from the trope of the prodigal son’s return to God’s very own declaration of adoration for His children. (That’s us—Yay!) More often than not, we might equate ourselves with the prodigal child rather than the latter; however, our focus also needs to be heavily bent on our adoption as God’s child because of the ultimate hope to be found in it.

My faith and confidence in the love God has for me began to grow more when my sister and brother-in-law began walking through the trenches of adoption. I realized adoption is not for the faint of heart, just read a few adoption blogs and you will understand why. I coupled this experience with the way Romans 8 says we have been adopted into God’s family and I was, and still am, blown away by this new awareness of God’s love. When couples adopt, they sacrifice time, energy, finances, and sometimes a little sanity because their desire for a child is so strong. They are willing to fight in order to have a relationship with a child they can love as their own. Adoption takes an immense amount of effort and God’s adoption of us was no different. In fact, the process of us becoming His children was even more daunting; God the Father had to give His Son in exchange for us. That is a hefty sacrifice. But God knew this sacrifice was worth it—that you were worth it. When a child is adopted, parents don’t differentiate between their biological children and their adopted children by saying something like: “This is Larry. He’s my adopted son. This is Bob. He’s my biological son.” That would defeat the point of adoption, which is to take someone in as your own. These parents would say, “These are my sons, Bob and Larry.” Yes, I am throwing a reference to VeggieTales in here. Just the same, when God adopts you He does not see you as adopted, He sees you simply as His.

Romans 8:14-17: “For those who are led by the Spirit of God are the children of God. The Spirit you received does not make you slave, so that you live in fear again; rather, the Spirit you received brought about your adoption into sonship. And by Him we cry, ‘Abba, Father.’ The Spirit Himself testifies with our spirit that we are God’s children. Now if we are children, then we are heirs—heirs of God and co-heirs with Christ, if indeed we share in His sufferings in order that we may also share in His glory.”

In this verse, we find that through our adoption into God’s family we are not only His children but His heirs. My ESV Study Bible describes it this way: “All who are God’s children are also heirs of His promises.” We should then, as heirs, know that these promises are ours and we do not need to be shy about taking firm hold of them. These promises breathe hope and wellness into our souls and bodies. In Jeremiah 29:11, we read, “’For I know the plans I have for you,’ declares the Lord, ‘plans to prosper you and not to harm you, plans to give you hope and a future.’” We can trust this promise of a hope and a future because our Abba is trustworthy and unfailing.

As God calls us His child, we are given a sense of belonging. This belonging brings acceptance to our souls in ways that, prior to our adoption, we could only dream of having. Often times, feeling hopeless stems from our belief that we don’t belong. But when we remind ourselves that God has called us His and gave up a sacrifice so He could have us, it helps us begin to address our desire to feel as though we have a place and purpose. Our hope is, and always will be, found in Him. After all, “In Him we live and move and have our being” (Acts 17:28). So why shouldn’t we find our hope in our Abba, the One who calls you His child?

*If you haven’t begun a relationship with Jesus Christ yet, we’d love to introduce you to Him and chat with you about what it means to follow Jesus. Send us an email here & we’ll connect!

Danielle Mercier lives in Ocala, Florida. She is a third grade teacher at a local school. She loves gardening, reading, laughing at memes online, and spending time at Disney. Danielle is passionate about equipping the next generation with the tools they need to become who God has made them to be.
Twitter
Recent Posts 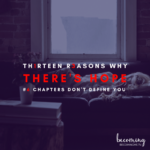 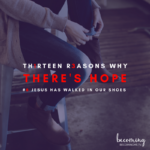