Are Men Better than Women?

I feel that in the last ten through twenty years we have begun to see bolder female leaders in Christianity than we saw in generations prior. Before this, we saw the normalization of the “private sphere” for women and the emergence of the powerfulness of the patriarchy. But now we are seeing a rising up and calling forth of women leaders and pastors teaching the Word of God in dynamic and God-inspired ways. At the same time, we are experiencing a pushback against this development within the church. But God never designed His Church (capital C to refer to the entire body of Christ not just a local organization) to be at war between genders. I have been told that women ought to remain silent and leave the preaching to qualified professionals—that women ought to “know their place.” That my desire to preach and teach was misguided and it is a “male profession.” Comments such as these signal a belief that men are better/more anointed than women. This is a fallacy our culture can no longer be so ignorant to believe because it not only damages our testimony but also how God intended us to see one another.

In her book, Half the Church, Carolyn Custis James talks about these claims showing how they directly combat the Word of God and the actions of Christ. She describes the way this belief literally cripples the Bride of Christ by taking half the population (females) and telling them they second-rate compared to the other half (males). It not only diminishes the purpose of the Church but also puts a great weight on the men in the church to be the only active participants. Thus, the Church limps since only half of the body is working. However, by seeing women as equal to the task (as God designed), we create a Church that can be vibrant and vigorous in its God-ordained purposes.

James describes how God uses the word “Ezer Kenegdo” to describe Eve—the first woman. Victor Hamilton wrote, “ [Kenegdo] suggests that what God creates for Adam will correspond to him. Thus, the new creation will neither be a superior nor an inferior but an equal. The creation of this helper will form on-half polarity and will be to man as the South Pole is to the North Pole” (175). James continues to further this description by writing, “[Ezer Kenegdo] will be [man’s] strongest ally in pursuing God’s purposes and his first roadblock when he veers off course” (112).

This becomes even more profound when we allow the definitions of the original Hebrew language to shape our view of the Scriptures. James tells us “The Bible doesn’t maintain that monolithic focus but repeatedly draws women into the action as unflinching heroines of the faith, stalwart kingdom builders, and valiant rescuers of the royal line of Christ.”

If we take this perspective, we can see how God’s original design was one of unity and comradery among brothers and sisters the Church. So, are men better than women? Simply, and biblically, put—no. God calls men and women to the same Great Commission. We might have different roles to fulfill just as the eye has a different role than the hand but He never disqualifies women because of their gender. He never made them second-rate citizens. He did not make men to be superior to women—nor vice versa. We would do well to become better students of Christ and watch how He treats the women He encounters. These encounters are always full of grace, dignity, and mutual respect. He calls all of us (men and women) to Him to complete the callings He has placed on our lives—not for our own glory but for His.

Danielle Mercier lives in Ocala, Florida. She is a third grade teacher at a local school. She loves gardening, reading, laughing at memes online, and spending time at Disney. Danielle is passionate about equipping the next generation with the tools they need to become who God has made them to be.

What Does It Mean to Be Female?Emily Cummins, Female, Uncategorized 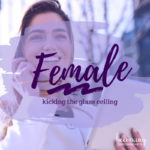