As a writer, you will often do a couple of drafts to help your thoughts transform into a more coherent and consistent piece. However, for most blogs or articles that I write, I often only write one, maybe 2 at the most. What this says about me, I’m not too sure. But, to clue you in to where my head is at on this topic, this is my fifth draft.

When I first started writing, I wanted to list all of the wrongs people had done to me—and by list I mean detail them. And by detail, I mean extreme detail so that they would know that I remember, and others would easily deduce who I was calling out. Basically I wanted this blog to be a giant shaming. Then I would write beautiful words and charmingly, witty phrases of how I had moved on; I was the bigger person. People would silently applaud my big heart, positive attitude and Christ-like demeanor amongst an array of sinners who had clearly “done me wrong”.

But as I wrote out personal details of my life masked in poorly hidden pseudonyms, I realized that maybe I hadn’t moved on. Maybe that healing process that I was reflecting on was not just faint scars, but in fact holes so obvious that you could see straight through. Bullet holes that I had ignored by simply placing band aids of distraction and busyness over.

The worst part is that those who we love are “people”.

The truth is that we hand those people metaphorical guns that allow them the opportunity to shoot big bullet holes in our hearts, whenever they choose.

The ugly reality is that those holes will not heal by simply ignoring them and going through your day to day.

But, I think you know all of this already. I think that you, like me, prefer to live in denial because that would mean that we have more control than we actually do.

Here’s the thing, we can’t change the past or what was done to us, but we can change how it affects us. We can change whether or not we allow that person’s wrong doings to control us.

The worst part of this is that we are also people and that we do this to God daily.

The truth is that He has commanded us in Ephesians 4:32 to “Forgive one another as quickly and thoroughly as God in Christ forgave you.” (MSG)

The ugly reality is that you have probably caused more pain to God than the pain others have caused you.

Will you forgive them because YOU have been forgiven in Christ?

So today, let’s take a step together and start forgiving those who have hurt us. Not because they have apologized, not because it didn’t hurt, and not because we support their poor choices.

Let’s forgive them because we don’t want bad blood to hold us back from the great things that He has in store for our becoming story.

Let’s forgive because we were forgiven for far more.

The Art of LearningAmanda Zecher, Anchored 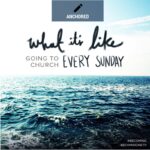 What It’s Like Going to Church Every SundayAnchored, Chelsea Jones