Do Over: What To Do When You’re Not Where You Want To Be

Have you ever found yourself in a place, in a relationship or in a situation that you just didn’t want to be? These moments leave us feeling stuck, unsure of what to do next, what step to take, who to talk to…when we’re not where we want to be, we can feel paralyzed.

I wonder if this is how Hannah felt. In 1 Samuel, we find Hannah heartbroken:

There once was a man who lived in Ramathaim. He was descended from the old Zuph family in the Ephraim hills. His name was Elkanah. (He was connected with the Zuphs from Ephraim through his father Jeroham, his grandfather Elihu, and his great-grandfather Tohu.) He had two wives. The first was Hannah; the second was Peninnah. Peninnah had children; Hannah did not. Every year this man went from his hometown up to Shiloh to worship and offer a sacrifice to God-of-the-Angel-Armies. Eli and his two sons, Hophni and Phinehas, served as the priests of God there. When Elkanah sacrificed, he passed helpings from the sacrificial meal around to his wife Peninnah and all her children, but he always gave an especially generous helping to Hannah because he loved her so much, and because God had not given her children. But her rival wife taunted her cruelly, rubbing it in and never letting her forget that God had not given her children. This went on year after year. Every time she went to the sanctuary of God she could expect to be taunted. Hannah was reduced to tears and had no appetite. Her husband Elkanah said, “Oh, Hannah, why are you crying? Why aren’t you eating? And why are you so upset? Am I not of more worth to you than ten sons?”

We find Hannah married to an incredible guy, but up until this point she hasn’t been able to have children. She was taunted and criticized by Peninnah, discouraged, misunderstood, and felt rejected. She wasn’t where she wanted to be. But in the midst of feeling stuck, she knew she had to do something…she had a decision to make.

So Hannah ate. Then she pulled herself together, slipped away quietly, and entered the sanctuary. The priest Eli was on duty at the entrance to God’s Temple in the customary seat. Crushed in soul, Hannah prayed to God and cried and cried—inconsolably. Then she made a vow:

If you’ll take a good, hard look at my pain,

By giving me a son,

I’ll give him completely, unreservedly to you.

I’ll set him apart for a life of holy discipline.

It so happened that as she continued in prayer before God, Eli was watching her closely. Hannah was praying in her heart, silently. Her lips moved, but no sound was heard. Eli jumped to the conclusion that she was drunk. He approached her and said, “You’re drunk! How long do you plan to keep this up? Sober up, woman!” Hannah said, “Oh no, sir—please! I’m a woman hard used. I haven’t been drinking. Not a drop of wine or beer. The only thing I’ve been pouring out is my heart, pouring it out to God. Don’t for a minute think I’m a bad woman. It’s because I’m so desperately unhappy and in such pain that I’ve stayed here so long.” Eli answered her, “Go in peace. And may the God of Israel give you what you have asked of him.” “Think well of me—and pray for me!” she said, and went her way. Then she ate heartily, her face radiant.

Hannah simply took the next step in front of her—she walked boldly into the presence of God, pouring out all of her pain, frustration, confusion, and heartache. She placed every ounce of her feelings of being stuck and paralyzed in front of God and asked Him to do what only He can do.

And you know what I love…she left radiant. Had her situation changed? Nope. Did the circumstances swirling around her shift? No. Did she immediately receive an answer? No. But she left changed.

I want to embrace the posture of Hannah in my own “stuck” moments of life. When I find myself in a place that doesn’t look or feel like what I had dreamed and hoped and all I want is a do over, I want to take all of the broken pieces to Jesus and ask Him to show up as only He can do.

Along with Hannah going directly into the presence of God, she also took responsibility for what she could control. And this is so important. Often, when I find myself in places, situations or relationships I don’t want to be in, it’s easy to slip into blaming others or pointing fingers. While Hannah couldn’t control that she hadn’t had a baby, she could control taking care of herself. We read twice that she chose to eat—once before going to talk to God and then after. Hannah released to God what only He could control and took ownership for the things she could control. I need to embrace doing the same in my own becoming story too.

Up before dawn, they worshiped God and returned home to Ramah. Elkanah slept with Hannah his wife, and God began making the necessary arrangements in response to what she had asked. Before the year was out, Hannah had conceived and given birth to a son. She named him Samuel, explaining, “I asked God for him.” When Elkanah next took his family on their annual trip to Shiloh to worship God, offering sacrifices and keeping his vow, Hannah didn’t go. She told her husband, “After the child is weaned, I’ll bring him myself and present him before God—and that’s where he’ll stay, for good.” Elkanah said to his wife, “Do what you think is best. Stay home until you have weaned him. Yes! Let God complete what he has begun!” So she did. She stayed home and nursed her son until she had weaned him. Then she took him up to Shiloh, bringing also the makings of a generous sacrificial meal—a prize bull, flour, and wine. The child was so young to be sent off! They first butchered the bull, then brought the child to Eli. Hannah said, “Excuse me, sir. Would you believe that I’m the very woman who was standing before you at this very spot, praying to God? I prayed for this child, and God gave me what I asked for. And now I have dedicated him to God. He’s dedicated to God for life.” Then and there, they worshiped God. 1 Samuel 1 (MSG)

God showed up in the midst of Hannah’s uncertainty, doubt, fear and frustration, and I believe God will show up for us too. When we find ourselves wanting a do over, we can find and experience freedom and hope by laying our disappointments, mistakes, mess-ups, fears and frustrations at the feet of Jesus. In doing so, we’re choosing to trust Him and then step forward confidently taking ownership for the things we can take ownership of.

Is this easy? Not at all. Do you think Hannah felt like this was a walk in the park? Probably not. But I don’t think Hannah regretted choosing to lean in and trust God. He showed up in her story and had been with her all along. He’s showing up in our stories too…it may not look or feel like what we always thought, but He’s there and He’s working in ways that only He can.

What can you take ownership of today? And what can you release, leaving at the feet of Jesus? 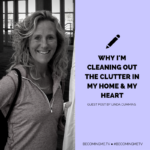 Why I’m Cleaning Out the Clutter In My Home & My HeartDeclutter, Guest Posts 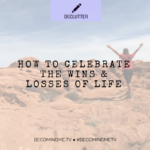 How To Celebrate The Wins & Losses Of LifeAmy Poole, Declutter