Today’s post comes from an amazing woman I’ve had the privilege of not only getting to know this year, but also running a half marathon with! Brew your favorite cup of coffee and dive into some incredible truths on the process of becoming a risk taker with my friend, Brett Detken…

Did you know that there are two different kinds of people in the world? CAMPERS and NON-CAMPERS! And let me tell you, I am a proud NON-CAMPER!

I mean seriously…I loathe camping. I do it for my kids, and because my husband likes it, but honestly, I would rather do anything else. I mean, camping is dirty, it takes twice as long to cook, clean up, shower and just do about everything! UGH! So my question always is, ”Why would you choose to camp when there is a perfectly good Marriott down the street?” Bottom line: I like to be comfortable!

I think I’m not alone in this. I think the majority of us like to be comfortable. The problem, however, with staying comfortable is, that it doesn’t usually lead us to the life we really want.

Most of us want to look back on our lives and know we made a difference, that we took some risks, and that at the end of the day, we made an impact on the world around us.

Becoming a risk taker is not easy. In fact, on the journey toward the life we want, most of us will encounter three “What ifs” about taking risks. And these questions, if we let them, will keep us from the dynamic life God has waiting for us.

Recently, my family packed up and moved 300 miles away to a new city. We left everything behind, including our friends and family of more than 20 years. We left our home, our jobs and our security. We left everything we knew, and took a risk. My heart ached as we drove down our street, down the block, and away from all we had known, and I’d be lying, if I said, I wasn’t asking if this risk was even worth it. Was it worth leaving behind all I knew for something I could not yet see?

Abraham had to wrestle with this “what if” himself. And yet in Hebrews 11, it is said of him that BY FAITH he said yes to God’s call to travel to an unknown place. When he left he had no idea where he was going, but instead of being controlled by the “what if’s”, Abraham was able to risk everything, “by keeping his eye on the unseen city with an eternal foundation” (Hebrews 11:10, MSG). He was able to risk everything because he realized that anything he might loose by following God in risky faith could never outweigh what he would gain by living BY FAITH. If Abraham had stayed, he would have missed out on a legacy too big to comprehend, and he would have never seen the miracles God was ready to do through him and his family. When you choose risky faith the benefits always outweigh the cost. I am discovering that first hand.

Jimmy Carter said, “Go out on a limb. That’s where the fruit is.” And as true as that is, living life out on a limb can also be a very solitary experience. Risk takers often go against the popular majority and often find themselves alone on the tightrope they are walking. However, there is another figure from the Hall of Faith in Hebrews that gives us hope. Noah was a man who built a boat on dry land. The city members mocked him, dismissed his risky actions as crazy, but BY FAITH he acted on what he was told, even though he could not see down the dark road ahead. The result? His family was saved, and “Noah became intimate with God” (Hebrews 11:9b, MSG).

Risking our reputations, our connections and our need to be liked is tough, but Noah reminds us that when we are willing to follow we find true intimacy. And a side note: I love how Noah’s faith spilled over onto those closest to him. They too were protected! When we walk BY FAITH, I believe God’s protection and favor touches all of those around us.

What if I do all of this, and it doesn’t work out like I hope? This is such a common lie that keeps us stuck on our journey toward becoming risk takers. However, another Hall of Faith member, Sarah, gives us a great example of what to do.

“By faith, barren Sarah was able to become pregnant, old woman as she was at the time, because she believed the One who made a promise would do what He said!” (Hebrews 11:11, MSG)

Becoming a risk-taker means that BY FAITH we believe that the ONE who promises is faithful. Sarah waited 20+ years before the promise was fulfilled, and yet even though it was long and she probably felt forgotten, she kept waiting BY FAITH. And she could only do that because, she was confident that the One making the promise would not let her down.

Hebrews 11 finishes by saying that not ONE of these men and women saw the full impact that their faith had on the world. In fact, it says that their stories merely set the stage for what’s ahead in our time. It is now our turn to risk, to not get sidetracked by the “what if’s” in life, and instead be women who live out epic stories BY FAITH. 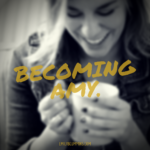 The Day God Hugged Me in the Starbucks Drive Through LineEncouragement, Featured, Personal Growth, Relationship with God