How can we authentically forgive those who have hurt us & never apologized?

Over my life, I’ve been hurt by girls who I thought were my best friends. When my mom died, I had a hard time relating to my friends because they couldn’t possibly comprehend what I was going through. One of my best friends at the time, let’s call her Sally, completely distanced herself from me; walking away from me when I needed my best friend the most.

For several years, I resented her. I resented how she had two parents; how her family never struggled; how she seemed to live this perfect life; how she could do everything she ever wanted. It wasn’t until we had gone our separate ways after college, and I had started seeing a therapist that I realized she never truly meant to hurt me. She did not know how to deal with what I was going through; how to relate to me.

It wasn’t until I put myself in Sally’s shoes that I realized she didn’t truly mean to hurt me. It was then that I was able to move on from that hurt; forgive her for her actions.

But even though I forgave her, it doesn’t mean we reclaimed the friendship we had.

One of the best lessons Sally taught me was that it was okay to lose friendships; it was okay to be hurt; but most importantly, you must learn to forgive others.

Just as God has forgiven us, we must forgive others.

Easier said than done, right? If you are anything like me, I hold grudges. I take those transgressions personally. I have a hard time letting things go.

Colossians 3:13 is my constant reminder of how I should, and need, to live my life. “Bear with each other and forgive one another if any of you has a grievance against someone. Forgive as the Lord forgave you.”

Growing up, my older sister and my cousins would play together and often leave me out because I was younger, and just couldn’t keep up. I would often go running to my Grandma Nelson, crying about how my feelings were hurt. She would tell me “don’t let them see you cry.”

It took a long time to realize the value in the lesson my grandma was teaching: to be the bigger person; to forgive and seek healing.

Holding onto grudges causes you more harm that it does them – it gives them the power, and it causes you to fall one step further from God.

By seeking to forgive others, you are seeking God, and you are authentically living the life He desires for you.

Forgiveness has nothing to do with whether the other person deserves it; it is about seeking God, because in the end, He shows us more mercy than we could possibly imagine. 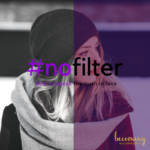 What does it mean to “speak the truth in love” & how can we do that?#NoFilter, Amanda Zecher 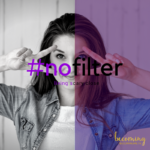