How To Handle Unwanted Change

Change is a way of life; it is the expected unexpected. Change is sometimes eagerly wanted, while sometimes it is unsought. It is when change is not wanted that we often have the hardest time accepting our circumstances.

John F Kennedy once said, “Change is the law of life. And those who look only to the past or present are certain to miss the future.”

When I was younger I hated change. The only time I was ever okay with change was when I could clearly see the benefits of the change.

Kennedy knew that change was the one thing you could count on in life. But what he forgot was what Hebrews 13:8 reminds us of: “Jesus Christ is the same yesterday and today and forever.”

Jesus is our anchor; He is unchanging and unwavering. Malachi 3:6 says, “I the Lord do not change. So you, the descendants of Jacob, are not destroyed.” No matter what life throws our way, He has our well-being in mind.

Jeremiah 29:11 says, “‘For I know the plans I  have for you’ declares the Lord, ‘plans to prosper you and not to harm you, plans to give you hope and a future.’” Jesus will protect you; He will provide for you; He is your hope and your anchor.

Unwanted change is hard to handle, and it is even harder when the change is unexpected.

I have dealt with a lot of unexpected and unwanted change in my life. When my mom died when I was thirteen, I had no warning. She had been in the hospital, but because I was so young, I was led to believe her condition was not as bad as it actually was. In reality, she deteriorated quickly. To say her death was unexpected and unwanted is an understatement. No one expects to lose their mom at the age of 13. And no one wants to go through their teenage years with just a father for guidance.

One of the most important lessons I learned after mom died was that I was not alone throughout it all. When my mom died, I felt so isolated from my friends; from my family. My dad, sisters and I all coped in different ways.

Deuteronomy 31:8 says “The Lord himself will lead you and be with you. He will not fail you or abandon you, so do not lose courage or be afraid.” He reminds us not to be afraid, even in a time of unwanted change. He is leading us through the murky waters, to a path greater than the one we were on before.

Unwanted change is a factor of life; the best way to handle it is by remembering you are not alone. You have the strength of God on your side. With Him, you can endure anything. 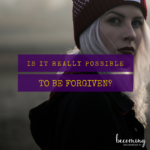 Is It Really Possible To Be Forgiven? Brooklyn Oseguera, When You Feel Like Your Story's Over 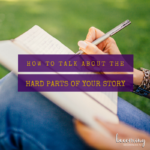 How To Talk About the Hard Parts of Your StoryEmily Cummins, When You Feel Like Your Story's Over