In with the New

We all have different opinions about new seasons, and my opinions tend to stem from my level of readiness to step into the new. Transition has always been difficult for me. I signed up to write this blog post months ago and, interestingly enough, the week this entry is posted is the week that I’ll be moving into my miracle house. Well, it’s not my house, but I am going to live in it and it is a miracle. I’ve gone through quite a few changes over the past few years and, for a girl who struggles with transition, it has not been easy… but I can see God’s hand in all of it.

In early 2016, and in one of the first times I can remember hearing God clearly, the Lord told me He was going to be moving me out of pharmaceutical sales. I MOVED TO GEORGIA to work in pharmaceutical sales and I absolutely LOVED my job. It made no sense, but He told me it would be on a Wednesday in July. Of course I doubted that I was really hearing from Jesus, but somewhere deep down in my “knower” I couldn’t deny that it was true. I carried on in my career like nothing had changed and thinking that maybe I could change God’s mind. And then, on July 13th, 2016 I got the call that left me paralyzed in fear and awestruck at the God who had been ridiculously accurate and overwhelmingly kind in preparing my heart for what He was about to do.

As a result, I had to make the decision to move out of my swanky Atlanta apartment, put all my possessions in a storage unit for some undefined amount of time, move 45 minutes away from the place where I had established roots with my church family, and move in with my family… oh, and I had no car. It was a move that I can’t say I would’ve ever chosen for myself. But I can say without a shadow of a doubt that I would do it again a million more times if I was given the choice. Living with parents when you’ve been on your own for nearly ten years is not the easiest thing, and living with three teenagers  that were starting their first years of high school and middle school is most assuredly NOT easy. But it was the most healing experience of my life. God taught me how to love real people up close and consistently. I had always run away from relationships in the past because they were hard, and because I felt much safer being “seen” than actually being “known.” From a distance I could control people’s opinions of me, but up close I had to let myself truly be known with no control over what the people around me knew. I was confronted with things that I struggled with more than I ever would’ve been had I continued to live alone, and I’m better and more free because of it. I learned how to be a sister for the first time in my life rather than trying to parent kids that weren’t mine to parent. Gosh… THAT was an ugly birth of freedom. I’ve never cried so hard in my life. I once read an article by Beth Moore that reckoned the entrance of freedom in our lives to a grueling, bloody, messy birth in a cave; and my friend Mo Isom talks a lot about how holy things happen in dark caves. (Mo’s also the girl who chose to birth 10 pound children on two separate occasions with no pain reliever because she knows that there’s purpose in the pain. Meanwhile, I would totally request an epidural once a month when Aunt Flo visits if that were medically acceptable. Clearly we are friends for a reason.) What if it’s the kindness of God to allow us to experience pain during transitional seasons because He wants us to get to know Him better as Comforter?

Now it’s time to make the move to the miracle house I told you about earlier. Here’s the short version of the story: last year during this same exact week I was asked to housesit for some friends of mine and because I had no car, all I could do was go on long walks around the neighborhood DURING WHICH I spotted my dream house being built and I jokingly prayed that the Lord would let me live there some day. Fast forward to Passion Conference 2018 when one of the families that served with me found out that I was driving 55 miles one way to my new job in ministry and offered for me to come live with them. The odds that they were the proud new owners of the house I had been jokingly praying over were 1 in 185,142 (based on suburbanstats.org), yet our God had orchestrated something that ONLY HE COULD and next week I will be moving into that EXACT house. He’s great at surprises. I’ll turn 31 this year and any normal person would be SO EXCITED not to be living with their parents anymore, but it has been one of the hardest things that I’ve ever had to do to make the decision to leave home. I’ve cried more tears over leaving the home I never would’ve seen myself living in as I turned thirty years old than I ever cried leaving any other home I’ve ever lived in. Maybe it’s the first time I’ve ever embraced what “family” really means and allowed myself to feel the weight of it; or the first time I’ve experienced people love the whole, real me up close and on purpose even through all my struggles. Whatever it is, it’s hard to leave even though I know without a shadow of a doubt that the Lord has called me into this new season and I am BEYOND grateful for the amazing family that I am going to be living with.

Through everything I’ve walked through in the past two years, I can say with all certainty that the only way to embrace the new well is to stay close to God in worship and His Word. It’s sounds so cliché, but it’s insanely true. This is coming from a girl who was an atheist throughout her entire college career and is now SO on fire and in love with Jesus, in case you needed a reference. There are things that the Lord wants to teach you about yourself, things He wants to reveal about Himself, faithfulness that He wants to demonstrate to you, and new levels He wants to walk you into but He won’t do it without your attention, and you won’t have nearly the amount of trust and hope as you walk through the valley if your eyes are focused on ANYTHING other than your Lord.

Worship. Stillness. Rest. Trust. He WILL establish you in the new season and rebuild the ruins with you with His own blueprint rather than the one you had constructed on your own. He wants better things for you than you could even imagine for yourself. Un-clinch your fists and let Him amaze you in this next season. He will do it.

Ryn Tomlinson is a resident of Atlanta, Georgia, a part of the Passion City Church family, the oldest of five girls, and is passionate about helping Christians learn to live in the fullness of the new heart that God has given them. She works in ministry at iDisciple and supports several non-profit organizations on a local and national level. She truly believes that “becoming” is an unraveling process that the Lord is in charge of & only He can achieve, and that growing in the wisdom and knowledge of the scriptures in the context of community is the best way that we can choose to partner with Him in the process. And she’s, really … really grateful for His grace in the process. 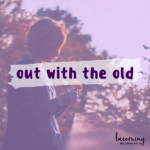 Out With The OldAna Munoz, State of Mind 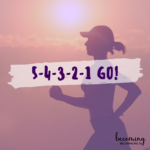