It’s Only Awkward If You Make It Awkward

“It’s only awkward if you make it awkward.”

I don’t know about you, but I have NEVER understood that quote. Ever. I mean, I’ve walked into some situations with zero intention to make it awkward. But if there were an award for somehow stumbling, (sometimes, LITERALLY stumbling), into an awkward situation—I’d win it.

A quick example for you: I once found out my ex-boyfriend was dating a friend of mine. So I thought it would be a good idea to talk to him about it (it wasn’t a good idea). Well, I marched up the stairs to where he was sitting at a football game ready to confidently assure him I was better off without him, when I literally fell UP the stairs to him. Who falls UP stairs??

Sometimes we have intentions to play it completely cool as we step into a tough conversation, and without fail…it’s awkward.

Whether it’s a conversation with a friend about how they betrayed you, a boyfriend you’re not so into anymore, or someone you lead about a decision they’ve made you don’t agree with…hard conversations can be really intimidating to step into.

I’m definitely not implying that I’m the master at handling hard conversations. But since that incident many years ago, here are some practical to dos I’ve learned in stepping into difficult moments after some embarrassing, tear-filled words and better-than-expected conversations.

Ask yourself what you want out of the conversation: You can never plan for how a conversation is going to go. You can perfectly strategize what you’re going to say, but the truth of the matter is you can’t guess what someone else is feeling, and you most certainly can’t guess what he or she is going to say. If you try, you’re stepping into dangerous territory. It can be hard to step into a conversation with the unknown of how the other person is going to act. I’ve found it helpful to take some time to reflect, journal, and really pin down my end goal in difficult conversations. Maybe jot down one or two things you REALLY want the other person to understand before walking away from the conversation. That way, you won’t be tempted to spill a ton of emotionally-filled words– you’ll instead know exactly where you stand in the conversation.

Ana Munoz is a Las Vegas native living in Atlanta, Georgia. She graduated from the University of Nevada, Las Vegas with a degree in Communication and a degree in Journalism & Media studies. She is passionate about learning, leadership, all things social media, and enjoying a good cup of coffee in a new city. 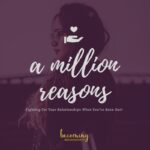 Fighting for Your Relationships When You’ve Been HurtA Million Reasons, Katie Bivens 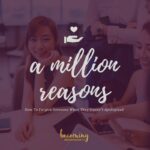 How to Forgive Someone When They Haven’t ApologizedA Million Reasons, Amanda Zecher