It’s Time for the Woman to Stand Up

I heard a statement when I was 16-years-old that I haven’t been able to forget. I vividly remember sitting in a hotel ballroom in Orlando where I was attending a student leadership conference, when the keynote speaker said these bold, challenging words: “It’s time for the little girl to sit down and the woman to stand up.” Nearly seven years later, those words are still ringing in my ears.
The little girl in me wants life to be pretty simple…like picking what restaurant you want to go to for dinner. But life doesn’t always have concrete answers. I’m discovering there are many shades of grey. For me, tipping into adulthood felt strange at first—like playing dress up in your mom’s clothes only to find out that they actually fit you. It was this sensation of stumbling around in the dark, tripping over furniture you didn’t know was there, all the while searching for the light. Many days I feel like I’m standing at the crossroads of that little girl I once was and the woman I know I am called to be. And it’s in this crossroads that I know I must make a choice to either remain the same or embrace the freefall.
Hebrews 6:1-3, 11-12 says, “Therefore let us leave the elementary doctrine of Christ and go on to maturity, not laying again a foundation of repentance from dead works and of faith toward God, and of instruction about washings, the laying on of hands, the resurrection of the dead, and eternal judgment. And this we will do if God permits . . . And we desire each one of you to show the same earnestness to have the full assurance of hope until the end, so that you may not be sluggish, but imitators of those who through faith and patience inherit the promises.”
I love how Eugene Peterson so bluntly explains the words of Hebrews 6:1-3, 11-12 in The Message: “So come on, let’s leave the preschool fingerpainting exercises on Christ and get on with the grand work of art. Grow up in Christ. The basic foundational truths are in place: turning your back on ‘salvation by self-help’ and turning in trust toward God . . . extend that same intensity toward a full-bodied hope, and keep at it till the finish. Don’t drag your feet. Be like those who stay the course with committed faith, and then get everything promised to them.”
Growing up from childhood into adulthood is a natural rhythm in life. We biologically can’t remain the same—we’ll become adults whether we like it or not. Just as we physically mature, God also calls us spiritually to mature as well. But I don’t think the words in Hebrews 6 are simply calling us to mature in knowledge. I think they’re challenging us to mature in our capacity…our potential…to mature into the women God originally designed us to be.
But here’s the thing: we can’t manufacture this kind of maturity. Rising to the occasion and becoming the woman God calls you to be, isn’t something we can just turn on and off like a light switch. It’s a transforming work God must do in and through us.
Romans 4:3, 17-18 says, “The story we’re given is a God-story, not an Abraham story. What we read in Scripture is, ‘Abraham entered into what God was doing for him and that was the turning point. He trusted God to set him right instead of trying to be right on his own . . . Abraham was first named ‘father’ and then became a father because he dared to trust God to do what only God could do: raise the dead to life, with a word make something out of nothing. When everything was hopeless, Abraham believed anyway, deciding to live not on the basis of what he saw he couldn’t do but on what God said he would do.”
Did you catch that? Abraham became who God made him to be because he trusted God to do it. That’s an incredible thought and it personally gives me so much hope. You see, God calls us to maturity, but He doesn’t just say, “Figure it out.” He actually says the exact opposite. Maturing into the women God calls us to be is found by sitting at His feet. It’s discovered in settling down and not trying to figure it out on our own. It’s accomplished through trusting Him to do what He said He would do. Maturity is found in growing your trust.
Hebrews 6:18-20 leaves us with incredible hope: “Hold fast to the hope set before us. We have this as a sure and steadfast anchor of the soul, a hope that enters into the inner place behind the curtain, where Jesus has gone as a forerunner on our behalf.” Jesus has covered our past, He is present in today, and He has run before us into our future. We don’t have to do this growing up thing alone. I can become the woman God created me to be because He is with me and He is for me.
This post originally appeared on pickyourportion.com. 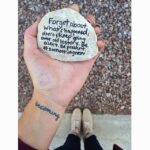