Learning to Love Your Greatest Mistakes

Recently I heard this story. You may know it.

It’s a story from John 21. To set the scene—Jesus has died and walked out of the grave. He’s appeared to the disciples a few times and hasn’t gone up to heaven yet.

A few of His disciples had gone out on the Sea of Galilee for a night of fishing. After a long night of catching nothing, the sun comes up and there’s a guy calling to them from the beach. He tells them to cast their net again, so they go for it and it’s suddenly so full of fish that the disciples can’t pull the net back in. I guess this miracle tells them Jesus is the guy on the shore, so Peter goes ahead and jumps out of the boat to swim to Jesus. Soon they all sit around a fire and eat breakfast together.

Peter. He’s the guy who got so passionate about defending Jesus, that he sliced off a guy’s ear. He’s the dude who, soon after the ear incident, denied knowing Jesus at all. Not once, but three times. Peter. He’s one of Jesus’ right-hand guys. He’s passionate and unpredictable.

The final thing Peter did before Jesus was nailed to a cross was to pretend he didn’t know Him (that’s where he denied knowing Jesus three times). Since then, Peter and Jesus have seen each other a few times and neither has brought it up. Maybe Peter’s hoping Jesus forgot? Maybe he thinks if he is super nice to Jesus then Jesus will sweep it all under the rug?

They’re sitting around the fire, relaxing after breakfast when Jesus speaks up. He asks a seemingly simple question—does Peter love him? Peter responds, “Yes, Master, you know I love you.” Jesus tells Peter to feed his sheep.

Again, Jesus is like, “Simon, Son of John, do you love me?” Again, Peter responds with, “Yes, Master, you know I love you.” “Okay, shepherd my sheep.”

Round three starts with Jesus again asking Peter if he loves Him. Peter’s gotten worked up now. He knows what Jesus is getting at. I imagine he’s red-faced and fidgeting (I definitely would be…). Peter responds with, “Master, you know everything there is to know. You’ve got to know that I love you.” Again Jesus says, “Feed my sheep.”

In the English language, love is love is love. We use one word to describe the range of emotions involved in love. In Greek however, there are a few different words for love. In this awkward game of 21 Questions with Jesus and Peter, they’re talking about two different kinds of love.

First, there’s agape love. It’s sacrificial, unconditional. It’s the kind of love that compelled Jesus to die on a cross for you and me.

Second, there’s phileo love. It’s approving and welcoming, a word you’d use to describe being best friends with someone.

So here’s the story, again.

With a breath of relief Simon Peter answers, “Master, you know everything there is to know. You’ve got to know that I [phileo] love you.”

Peter had really screwed things up. He’d made mistake after mistake. He didn’t want to talk to Jesus about it because Peter knew he deserved, at best, to be left in the dust. So Jesus changes His question. Jesus changes his question. Jesus takes a look at Peter and all of Peter’s mistakes…and Jesus chooses to look at Peter’s heart. Jesus asks for the best Peter has even if it doesn’t necessarily measure up. Even if it means more mistakes down the road. Jesus just wants, as much as is possible, Peter’s passionate and unpredictable heart.

We can love our greatest mistakes because through our greatest mistakes we get to know Jesus more; we get to see that our love for Jesus doesn’t determine our position with Him. If it did then we’d all be left in the dust, hanging out with Peter. No, it’s Jesus’ love for us that changes everything. In His love, Jesus doesn’t just sweep our mistakes under the rug, but pulls those mistakes out of hiding and weaves His grace, His faithfulness and His goodness into the parts of our story we’d like to forget the most.

Today, let’s remember this story. Let’s remember that when our love isn’t enough and when we’re tempted to think we’re just too messed up, Jesus stoops to call us friend. 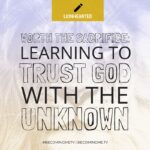 Worth the Sacrifice: Learning to Trust God with the UnknownKatie Cummins, Lionhearted 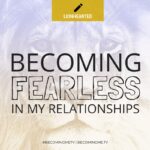