Living With The Posture Of “For Such A Time As This”

This fall, as I stood at 14,000 feet on top of a mountain, I was reminded of how many times I’ve let fear dictate my actions and deter me from really diving head first into life and into my faith. I’ve said “no” to so many things, afraid to fail or be embarrassed or get hurt. But I’ve learned that living in a posture of fear makes for a pretty lousy story. When we choose to play it safe and let fear drive our decisions, we risk missing out on opportunities to experience God, but we also miss opportunities to lead others to experience Him.

If Esther would have let fear dictate her actions, she never would have gone to the king. When Mordecai first warns her about Haman’s plot to kill the Jews, she resists doing anything about it. No one in the palace knows she’s a Jew and so she knows that her life is safe. It’s not that she doesn’t want to help her people; it’s just that her initial reaction was to play it safe for herself.

That’s where many of us stop in our own stories. My first reaction is always to protect myself, to keep safe. Saying “no” to opportunities is so much easier than saying “yes.” And fear is usually the reason I say “no”—fear of failing, fear of embarrassing myself, fear of getting hurt physically or emotionally.

Esther said “no” at first. She hadn’t seen the king in a month and knew that she would risk her life if she went to see him. But Mordecai reminds her that her faith should be stronger than her fear. He tells her, “Do not think to yourself that in the king’s palace you will escape any more than all the other Jews. For if you keep silent at this time, relief and deliverance will rise for the Jews from another place, but you and your father’s house will perish. And who knows whether you have not come to the kingdom for such a time as this?” (Esther 4:13-14 ESV).

Esther finally agrees and prepares to risk her life for the lives of her people by praying and fasting. She doesn’t take the risk lightly and she goes knowing that any favor given to her will be from God, not the king. And when she enters the king’s court, he holds out his scepter. And not only does he spare her life, he listens to her pleas and petitions for the Jews, saves them from Haman’s wrath, and promotes Mordecai to second-in-command to fulfill a promise he made before. But let’s not miss that Esther’s story isn’t just about bravery and girl power. It’s a story of God’s power in Esther’s life and her deep trust that He was holding her life in His hands.

How can we take on Esther’s attitude of faith? She viewed her life through the lens that God had made her queen for this very purpose, for such a time as this. How do we take on this posture in our own lives?

Esther, before she went to the king, spent several days fasting and praying and asked the rest of the Jews to do the same. Throughout the Bible, we see people fasting and praying to focus solely on God and to learn to put their full faith and trust in Him as their strength. Esther knew that by doing this, she would be investing her time, emotions, and even physical health in her relationship with God. While we don’t need to fast every single day, the more we intentionally focus on Him on a daily basis, the more we learn about who He is and what His character is, showing us how to trust.

Rely on others to help point us to God.

Esther didn’t go into the king’s court without the support and prayers of every Jew in the city of Susa. She specifically asked Mordecai to have her people pray for her, knowing all of their lives were at stake and knowing that their support would encourage her in her faith. In times where fear is overwhelming our faith, we should go to other Christians for support, encouragement, and prayer. We don’t have to face fear alone.

Remember Whose purpose we are living for.

Esther changed her mind about going to see the king because Mordecai reminded her that God was the one who placed her in a position to be queen and that, if God’s purpose was for her to use that position to save the Jews, He would protect her and ensure that the king showed her favor. While being queen probably had some perks and certainly assured Esther a comfortable, safe life, she remembered that she was not there for herself. Suddenly, the title of queen held the weight of the entire Jewish population in Susa. She chose to let her faith guide her purpose and chose to take the chance of risking her life to save God’s people. We must continually remind ourselves that our purpose in life is not to live for ourselves but to be continually seeking out our purpose in God’s story.

If our stories are defined by fear, we miss so many chances to experience God’s grace and to show His glory to the people in our lives. When we chose to live in a posture of “for such a time as this” instead of fear, we become a part of a story so much greater than our own that point directly to Christ and His kingdom. 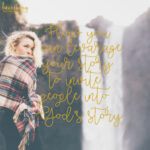 How Can You Leverage Your Story To Invite People Into The Story Of God?Brooklyn Oseguera, Your Story Matters 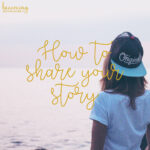 How To Share Your StoryKelsey Smith, Your Story Matters