Insecurity is one of those feelings I think we have all battled with at one time or another. That little voice in the back of our head telling us “we aren’t good enough,” “we aren’t smart enough,” or “we aren’t pretty enough” is something I can say I have struggled with time and time again.

I had a hard time with insecurity in high school, like any normal girl. I was smart, but I never quite felt smart enough, I was pretty, but I didn’t fit into the normal standard. Being taller than almost all of the girls, and all of the guys in your graduating class doesn’t do much for your dating life, and your confidence.

It took hitting rock bottom in college with my spirituality and working through my emotions with a counselor before I realized I was internalizing so many negative thoughts that were infiltrating who I really was, and impeding my relationship with God.

Romans 12:2 says, “Do not be conformed to this world, but be transformed by the renewal of your mind, that by testing you may discern what is the will of God, what is good and acceptable and perfect.”

I realized that I was too worried about what others thought of me, that it was causing me to forget what God thought of me.

Colossians 3:1-3 says “Since, then, you have been raised with Christ, set your hearts on things above, where Christ is, seated at the right hand of God. Set your minds on things above, not on earthly things. For you died, and your life is now hidden with Christ in God.”

While realizing that I have insecurities has not taken them away, it has made me more aware of them and the importance of being cognizant when they try to creep in.

Trust me, they still creep in. I still have my pity parties when another friend gets a boyfriend and gets married while I am still living that single life. But I try to remember that this is just the timing God has for me right now. He has something bigger planned for me and while I may not be privy to it, I have to trust in Him to provide for me. I also have to trust in Him to pick me up when I am falling down.

So while it may seem to be easier said than done to say “Not Today Insecurity,” you just have to remember, is this really who I am and who I want be? Because you truly are who you choose to be. 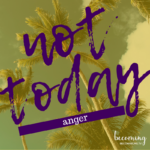 Not Today: AngerAllie Reefer, Not Today 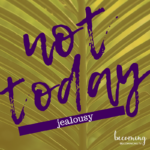 Not Today: JealousyKelsey Smith, Not Today