For the last few years I have been obsessed—and I mean literally obsessed—with any and every female warrior story I could get my hands on. I’ve committed to devouring stacks of books, scoured the Internet, and repeatedly found my eyes glued to Netflix’s array of warrior flicks. Let’s just say gals like Katniss Everdeen, Calamity Jane, Mulan, Beatrice Prior, and Elsa have become some of my closest besties. I’ve consumed incredible books like Girls with Swords and Lioness Arising by Lisa Bevere, Let’s All Be Brave by Annie Downs, and Warrior Chicks by Holly Wagner. I’ve had countless dance parties to songs like “Titatium”, “Fight Song”, “Roar” and “Stronger”—all of which you can find neatly packaged on Spotify in my #bulletproof playlist. I even began concocting plans for a one-of-a-kind warrior tattoo (which I still haven’t decided on by the way).

And in the midst of my dance sessions, poolside reading, and Netflix binging, a common thread emerged in these leading ladies’ plot lines: they were feisty, fierce, bold, and confident. They overcame their fears, they rallied people who had given up together and re-introduced them to hope, they kicked butt and took names, they stared death in the face…and they won. They were lionhearted.

“Lionhearted: constantly challenging oneself; taking every single opportunity without regrets; learning, developing and seeing beauty in all kinds of moments in life no matter how big or small they may be; knowing what you’re worth, treating yourself like you deserve to be treated; simply, just being you and being brave; like a lion, you fight for what you stand for; a lionheart would never give up on its dreams; exceptionally courageous or brave.”

It wasn’t really a coincidence or sign of boredom that led me to these heroines’ front doors. Deep down I have been aching for something more, for a bravery and strength to rise up within me, within my own story. I have been ravenously devouring the stories of warriors hoping I would be inspired to be a warrior too.

But alongside their brave acts of heroism and shiny swords, the women I have so passionately been studying have an additional common thread that reaches beyond sleek confidence and into the depths of pain, heartache, betrayal, and shame. My feisty heroines probably wouldn’t classify themselves as brave or strong or fierce. In fact, they might argue the exact opposite. They would defend that they were simply stepping up in response to the cards life dealt them, to what needed to be done in order to survive, and to protect those they love.

There isn’t glory without guts. There isn’t a warrior without something to fight for. Gumption and pain go hand-in-hand. Without the affliction, the misery, the falseness & deception, we would have no need for spunk and courage. We could simply coast through life on a sugar high of macaroons and Pumpkin Spice Lattes.

Deep down, I don’t think God made us to simply coast. I believe He fashioned us with incredible purpose and armed us with a tenacious strength we often don’t even realize we have within us. Before His crucifixion, Jesus empowered and equipped His disciples—and He’s equipping us still today:

“I’ve told you all this so that trusting me, you will be unshakeable and assured, deeply at peace. In this godless world you will continue to experience difficulties. But take heart! I’ve conquered the world.” John 16:33, MSG

Jesus never mentions a lack of fear in His message to us. Rather, He reaches down and whispers, “Precious daughter, life is going to happen. It’s going to hurt. But in the midst of it all, you can live unashakeable and assured. You can stand grounded in peace. I’ve already won.”

Maybe living fearless is more about embracing the reality that there will be fear and pain and stuff we don’t want to walk through; yet, in the midst of it all, we can boldly steep our lives in the grand truth that our God has already won.

So when that friend you thought would stand with you through it all betrays your trust, your world doesn’t have to be shaken because we trust in a God bigger than the sting of betrayal; when you receive the phone call from the doctor asking you to come in for just a few more tests because they think they’ve spotted something, you can rest assured, deeply at peace, because we serve a God who is stronger than the results on a doctor’s report; when your husband of 27 years declares he no longer loves you and wants a divorce, you can stand grounded in the truth that you are a loved daughter of the King of kings; when your boss shares that you’re no longer a good fit for the company and that cuts are being made, you can walk confidently knowing God has fashioned you with purpose; and when the bills are piling up and it seems like this month you just won’t be able to make ends meet, you can boldly worship the God who provides.

The mark of a warrior is one who drives her stake in the ground, claiming victory over the decisions of yesterday while boldly fixing her eyes on the path ahead. She laces up her boots, brushes the dirt off her face and declares herself to be the beloved warrior God already designed her to be. Warriors embrace a lionhearted stance, declaring war on purposelessness while pursuing the victory that is already ours to claim.

May we be women anchored in our beliefs who passionately pursue becoming the women God has made us to be…and may we not be afraid to lace up our boots because friends, we are warriors. 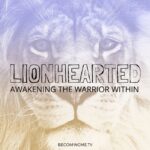 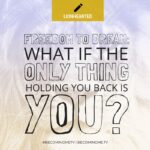 Freedom to Dream: What If the Only Thing Holding You Back Is You?Lionhearted