Shake It Off: When You Feel Misunderstood

We all know how it feels to be misunderstood or misrepresented, right? Life sometimes feels like a massive game of telephone – one thought or word gets mistranslated from person to person, and what we meant to say or the way we intended to live our lives was completely misunderstood.

If there’s anyone who knows what it’s like to feel misunderstood and misrepresented, it’s the incredibly talented Taylor Swift. In light of the series title, I couldn’t leave her out of this. ☺ Swift launched an entire album and stadium tour generating millions of dollars and reaching hundreds of thousands of people based off of feeling misrepresented and as though her reputation (how others see her) doesn’t match up with who she actually is.

I got to dance the night away at her Reputation Tour this past weekend and it was a blast. During her concert, she spoke powerful words that she’s learned from this season of fighting her reputation, “You shouldn’t care so much if you feel misunderstood by a lot of people who don’t know you, as long as you feel understood by people who do know you, who will show up for you…”

Her words ring so true, and it’s why we have to fight to stick to our tribes. One thing I’m not a fan of in our culture today is that it’s all about who you know, now about if you really know anyone. And that’s unfortunate. It leads to loneliness, confusion, and an endless search to be ‘enough’ just as we are.

We have to fight against culture and cling to our tribes. We need people who will remind us who we are, and point us back to who God says we are. [side note: I’ve been listening to “Who You Say I Am” by Hillsong Worship nonstop – it’s a beautiful anthem if you need a reminder that you’re a child of God].

The good news today is that you are completely, one million percent understood and loved by God. I encourage you to take a few minutes and dive into Psalm 139 – you’ll be encouraged and gain insight into how fully known and loved you are by God.

I know it’s easy to say we can “shake off” the feeling, but it’s harder to do. So my encouragement is to remember who you are. When you feel misunderstood, over communicate. Try to understand where the other person is coming from rather than being immediately understood. Cling to your people. Shake it off and dance when you can. Stay on the becoming journey – I promise it’s worth it!

Ana Munoz is a Las Vegas native living in Atlanta, Georgia. She graduated from the University of Nevada, Las Vegas with a degree in Communication and a degree in Journalism & Media studies. She is passionate about learning, leadership, all things social media, and enjoying a good cup of coffee in a new city.

Shake It Off: Moving Forward When Your Story Doesn’t Unpack How You ThoughtShake It Off, Terasha Burrell 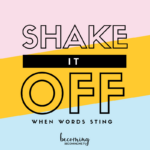