Shake It Off: When You Feel Unheard

I am going to come right out and say that I had a hard time with this topic. I am the type of person who makes herself heard… even to the detriment of some relationships. In my own selfish defense, I always feel like when I am voicing my opinion, it’s to help someone else.

But as I sat there reflecting on what to write about, I realized that one of the best examples of not feeling heard, was when, over the course of several years, I felt like God wasn’t hearing me.

When I was in my late teens/early twenties, I battled with depression and serious doubts about God. After my mom died, I went through seven years of just one death after another. I felt like God was slowly picking off all of the significant influencers in my life.

I felt defeated. I would cry out to God asking why this was happening to me. Why He was trying to make me feel alone in the world.

I felt so unheard. So ignored. So unloved.

It wasn’t until I really faced the source of the problem that I really start to hear God again. I realized that God wasn’t punishing me. He wasn’t taking all of these people away from me to teach me some twisted lesson.

God wanted me to turn towards Him in the midst of all of the trauma, depression and anguish.

I was angry with all that had happened to me. But the problem with that thinking, is that it wasn’t God DOING something to me. I had no reason to be directing my anger at Him. I needed to be drawing closer to Him, not pushing Him away.

Hebrews 4:16 reminds us, “Let us then with confidence draw near to the throne of grace, that we may receive mercy and find grace to help in time of need.”

God wasn’t hearing me because I wasn’t talking to Him – I was yelling at Him. I was directing my anger at Him, and I wasn’t listening to Him as He tried to show me mercy and grace.

It is so hard to be in the position where you feel like you are unheard. But it is even harder to shake it off, take a step back, and listen.

One of the best lessons my boss has taught me is to actively listen to people when they talk to me. More times than not, they are telling you something important, but in a way that is not obvious.

In a world filled with instant gratification, we often have to remember to pause, slow down, and regroup. So when you feel unheard, take a step back and ensure you are listening to the other person. Because often, we are feeling just as unheard as the other person. 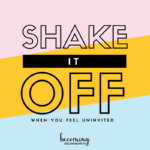 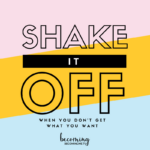 Shake It Off: When You Don’t Get What You WantSarah Weiskopf, Shake It Off