the friend at midnight

By [email protected]
Posted October 24, 2012
In Personal Growth, Relationship with God, Relationships
the friend at midnight2012-10-242012-10-24https://www.becomingme.tv/wp-content/uploads/2021/07/becominggold.pngbecomingme.tvhttps://www.becomingme.tv/wp-content/uploads/2021/07/becominggold.png200px200px
0
1
Luke 11v5-8
Then he said to them, “Suppose one of you has a friend, and he goes to him at midnight and says, ‘Friend, lend me three loaves of bread, because a friend of mine on a journey has come to me, and I have nothing to set before him.’
“Then the one inside answers, ‘Don’t bother me. The door is already locked, and my children are with me in bed. I can’t get up and give you anything.’ I tell you, though he will not get up and give him the bread because he is his friend, yet because of the man’s boldness he will get up and give him as much as he needs.
*                      *                      *                      *
I can count on one hand the number of people I could call at 2:00 a.m. and who would answer the phone. These individuals—some by blood, others by mutual life experiences—would move heaven and earth to help me, if I asked. I don’t have to beg or plead for their help. They just help me.
I’ve never thought of God as a 2:00 a.m. friend until recently. On the verge of making an important decision, I was asked if I had talked to God about it. I looked at my friend hesitantly, knowing they were expecting the truth, but not wanting to admit that I hadn’t. I assumed that this opportunity had come straight from God and I didn’t need to give it a second thought. But that question pricked my heart in a way I wasn’t expecting. Had I talked to God about it? What was I supposed to do? I couldn’t wait on making my decision for some bold sign in the sky or audible voice, and frankly, I had no clue how I would even know what God was trying to say to me. Would I hear a “yes” or “no,” or just feel a certain feeling, signaling which path I should take? I wrestled within myself. I searched my Bible for a verse that would make me feel warm and fuzzy. I frantically sought a sensation of peace so that I could pillow my head that night with direction and purpose.
None of that came.
It wasn’t until my eyelids were heavy and the hour-hand on my clock ticked later and later and into the night that I began to hear something. In all of my dizzying rush to force an answer out of God, I hadn’t been listening at all. I had just been knocking on the door, not waiting for Him to actually open it up. In the stillness of my room, I never received that audibly loud, booming God-voice or visit from an angel, but I did receive a “peace that passes all understanding.” I had knocked, or perhaps more accurately, banged on the door, and God answered.
In the Middle East there is a well-known code for hospitality. Historically, when a traveller stopped for shelter and a warm meal, one was under an obligation to fulfill their needs. Because of this, when a neighbor knocked on your door asking for bread, you’d answer, knowing in full confidence that he would do the same for you. In fact, you could walk confidently to your neighbor’s home and simply knock on the door, knowing that he would get out of bed, answer your call for help, and share his family’s bread.
I think talking to God is a lot like the picture Luke gives us between the two friends in the parable. There was a camaraderie rooted deep inside this friendship, a confidence that they would have each other’s back—even if it meant getting out of bed in the middle of the night. All they had to do was knock and they’d receive an answer.
I bang on God’s door too much. I do all the talking and asking, but rarely stop knocking. I don’t take my fist away from the door long enough to give room to God to open it up to me. Perhaps the root of the issue is that I don’t trust that He will, in fact, open the door. When a situation calls for action, I want to grab life with both hands and make it happen. I think God will be too busy to get out of bed, and offer me His bread. So I create my own pseudo-bread. And each time I do this, I’m not satisfied, and the bread, well, it just doesn’t taste like bread.
Maybe this story is more about faith than it is about bread or travelers or waking someone up in the middle of the night. Maybe it’s a story about trusting in a God who is eager to respond to my knocking.
I don’t question the reliability of my 2:00 a.m. friends at all. In fact, I have complete confidence that they would help me without a second thought. I want to see God that way too. I want to live freely in the assurance that He won’t leave me standing in the cold, pounding on His front door. I want to embrace a God who is good and who can be trusted.
Now when I talk to God, I’m not approaching a door, doubting that I’ll be invited inside. I’m approaching a door knowing that all I have to do is knock and He’ll open it wide, fresh baked bread waiting. 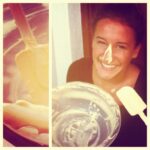