Last December I was preparing to make my second cross country move from the fabulous city of Las Vegas to sunny Florida. As I made my game plan, I knew I didn’t want to make the 2,233-mile trek with a trailer in tow, so I began sifting through my apartment (aka. the #babecave), making piles “to keep”, “to throw away”, “to give away”, and on and on. I thought I had sorted through everything really well and as the eve of my moving date arrived, I was even patting myself on the back for a job well done in prioritizing what to keep and leave behind.

Let’s just say, not everything fit. I thought I had gone through my stuff, I thought I had truly whittled down what I needed and wanted to keep; but I was still left with piles leftover. Rather than taking the time to go through the overflowing bags, I decided to ship what wouldn’t fit in my car. Win-win, or so I thought. 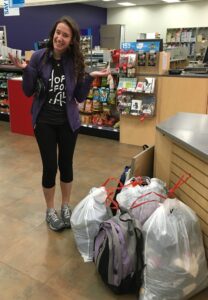 My Mom and I piled my car with bags, drove to FedEx and stuffed boxes with clothes and pillows to ship across the country. I paid the fee and moved on, not thinking twice about it—until about 3 weeks later when I unpacked, cleaned out my closet, and then proceeded to get rid of the same amount of items I had just paid to ship cross country. *Face palm*

I paid to ship stuff that a few weeks later I ended up getting rid of…I could have used the baggage fees to buy new clothes, rather than worrying about shipping the old!

Isn’t this so life? Stepping into a new season, a new chapter, a new day, a new year, I tend to want to cram all of the old in with the new…not realizing that in doing so, I’m paying a baggage fee…

When I carry unforgiveness with me, I’m paying in broken relationships and internal chaos.

When I carry anger with me, I’m paying in frazzled emotions.

When I carry others’ expectations with me, I’m paying by exchanging freedom for bondage.

When I carry fear with me, I’m paying by missing out on what I was made to do, to be.

When I carry the pursuit of perfection with me, I’m paying in a lack of confidence in who I am and who I’m becoming.

When we don’t take the time to go through the present and the past, we ultimately can’t make room for the new. We pay for everything we carry—and not all baggage fees are bad. When I set my alarm for an early morning workout, I’m paying in the form of an hour less of sleep under warm, cozy covers! But I’m gaining health and strong muscles. We pay for what we carry…we just need to decide what we want to pay for…

“This is what God says, the God who builds a road right through the ocean, who carves a path through pounding waves, the God who summons horses and chariots and armies—they lie down and then can’t get up; they’re snuffed out like so many candles: ‘Forget about what’s happened; don’t keep going over old history. Be alert, be present. I’m about to do something brand-new. It’s bursting out! Don’t you see it? There it is! I’m making a road through the desert, rivers in the badlands.'” Isaiah 43:16-19, MSG

There are many things I want to carry with me into 2017:

Lacing up my warrior boots

Embracing the journey, the process, the becoming.

The pursuit for perfection

Fear of missing out

Doubting that God does know what He’s doing

Being so hard on myself.

We’ve all got suitcases headed into 2017. What do you want to carry with you? What do you want to leave behind? If I could rewind time and go back to my little piles in the #babecave, I would have said, “Emily, you don’t need this stuff…you’re going to get rid of it anyways! Don’t pay the couple hundred dollars to ship it. Leave it behind.” In 365 days, I don’t want to look bak on kicking off 2017 with the same story, wishing I would have left things behind. Warrior friend, let’s do the heavy lifting today. It’s worth it tomorrow. And the next day and the next. 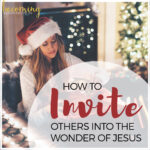 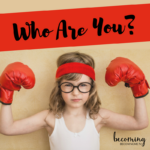 Who Are You?Brianna Nelson, Choose To Be Her