Why Fight Song Was My Anthem for 3 Months

There is this weird, universal coincidence where artists release songs just when I need them the most. During my first semester in college Michael Buble’s hit song “Home” was released. The month prior to my 22nd birthday, Taylor Swift’s “22” came out. When I was looking for my first, full time job in ministry, Hillsong’s “Oceans” was the biggest hit in the worship top 40. And, last spring, when my life came to a standstill, “Fight Song” hit the airwaves.

But what happens when you don’t? I’m not talking about loosing my memory, or blocking out time. No, I know that I did things, however, at the time, my life had hit a long pause. I felt like I was in an eternal funk. The year prior I had felt like I was running—constantly moving to the next best thing. God had me in movement. God had me in change. God had me.

Something changed though. It’s like we were driving down the road and we hit this red light. Not just any red light, the red light that is 5 minutes long. You know, the one in your town. It’s the one that you avoid at all costs. The one that you’ll only hit if you get lost or forgot where you were going, or absolutely must pass in order to get where you need to go. Well, this is where God led me. He led me to that red light that lasted far longer than I had wanted it to.  I had places to go in life. I had goals. I had things that I wanted to see and do and be a part of. I had a timeline. And God said stop.

I don’t know where you are today. Maybe you are in the season of go, and you are moving from one thing to the next. But maybe, you aren’t. Maybe you are like me not too long ago and your story has stopped. You feel like you have lost your purpose, that your destiny is dull and boring, and that you aren’t going anywhere.

You feel alone. You feel lost. You feel like someone has robbed you of your dreams.

“Don’t be afraid, for I am with you. Don’t be discouraged, for I am your God. I will strengthen you and help you. I will hold you up with my victorious right hand.” Isaiah 41:10, NLT

And so as I listened to the words of this top 40 hit, I began to realize something—I had given up the fight, I had stopped living my life, and had allowed others to define my status. I had allowed my circumstances to control me, mold me, and rob me. I had stopped becoming who God made me to be. I had become discouraged.

If there is one thing I know, it’s this—your story is so great that God needs you to be rested and strong for the fight. So turn on your anthem, your “Fight Song”, and rock out during that red light. Because when God hits pause on our journey, we have a choice. We can be discouraged, or allow Him to use this time for rest and strengthening—a time to continue becoming who He made us to be. 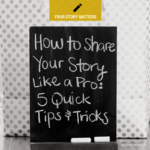 How To Share Your Story: 5 Quick Tips & TricksEmily Cummins, Your Story Matters 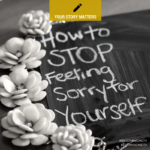 How To Stop Feeling Sorry For YourselfChelsea Jones, Your Story Matters