Why I’m Thankful for Rejection

I often look at God like a vending machine. Pray a prayer, wait a reasonable amount of time, prayer gets answered “yes” and I walk away with what I want.

Usually, but not always.

Not always does God answer my prayers with a “yes”. And while the “no’s” occur far less often, they hurt and are more memorable. So memorable, that I have often found myself choosing to grip tightly to the trials of life, instead of leaning on God in prayer and seeking His word for answers. Not because I know it all, but because I’m afraid of what will come if He doesn’t respond with the answer I’m looking for.

I’m afraid of God rejecting my prayers. And in some way, I don’t think I’m alone in this fear.

There’s this guy that the Bible talks about who you may be familiar with—his name is Daniel. You’ve probably heard his story about surviving a Lion’s Den with God’s protection. What I love most about his story is how it starts. Daniel didn’t enter into the Lion’s Den knowing he would make it out alive. In fact, when he was walking into the Lion’s Den, he was probably thinking there was a good chance that God had answered his prayer with a “no”.

When, under the pressure of anti-Israelite advisors, the King decreed that the Babylonian nation was to pray to him alone for 30 days, fear among the Israelites was at the highest level. However, Daniel knew that he must remain faithful. He was so confident in who God was that he continued on his daily routine of three prayers a day, openly. When Daniel was caught, he confidently entered that Lion’s Den, not because he knew he would walk out of it alive, but because he knew who God was and that He was in control.

This is real faith. This is living lionhearted.

What if we lived like Daniel? What if in our “Lion’s Den” moments of life—those tough moments where we don’t know the outcome—we walked confidently in who God was? Because, even if it doesn’t work out, even if God answers “no”, He is still God and He is still at work.

That’s the cool thing—He always has a plan at work. God might not have answered Daniel’s prayer in Daniel’s timing; however, He answered in a way that not only brought ultimate protection to Daniel’s life, but to the nation of Israel. When the King saw that Daniel was alive and completely untouched, he threw all of his advisors who had plotted this scheme against the Israelites into the Lion’s Den to their death. Had Daniel’s prayers of protection been answered at a sooner time, keeping him from entering the Lion’s Den, the nation of Israel would not have ultimately been saved from these enemies.

Now, I’m not saying that God is going to send your enemies to meet their fate (as nice as that might sound in the moment), but what I am saying is that even when God seems to say “no”, He usually is protecting us from something greater we can’t yet see.

Over the past few years I’ve discovered that some of the biggest parts of my becoming story, are when God chooses to say “no”—those unanswered dreams, hopes, and desires have shaped who I am today. Not in a negative way, but in a way I can walk confidently in because even in the deepest, most dark, “Lion’s Den” moments of life I can say that I know God is at work. I know that God’s “no’s” are often protecting me from something that I may not be able to see at the moment.

I think the same is true for all of us. Perhaps right now God may be saying “no” to a dream, hope, or desire that you have been praying for. In the midst of your own fear and uncertainty, know this: God is for you and He goes before you. And He, right now in this very moment, is shaping you into the woman He made you to be.

So friend, let’s trade our fear of the unknown with a deep-rooted trust in the King of Kings—who is the same God who protected Daniel in the Lion’s Den, Noah in the Ark, and sent His son to die for us on the cross. Let’s let go of our fear of rejection and turn to the God of protection, because we serve a God who is in control, a God who will not fail.

Today—no matter what we are facing—we can live lionhearted because we are confident that God is our ultimate protector. 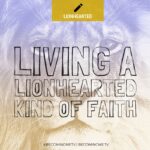 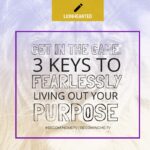 Get in the Game: 3 Keys to Fearlessly Living Out Your PurposeAmanda Zecher, Lionhearted