Why Ministry Is What I Do Daily, Not Just On Sunday

She stood up nervously, wanting to share a little about herself. After making an introduction and telling us her name, she began. 20 minutes later, she paused only because someone interrupted to have her wrap up and sit down. I could’ve sworn we’d just sat there listening for an hour because I now know…everything about that girl. Initially scared to speak up, she began talking and all the details quickly spilled from her lips. She just needed someone to know.

Days later, I found myself in a similar situation. I’d turned the hall corner and discovered an older woman who wanted me to know…everything. Pulling her gray hair into a ponytail and continuing to smooth out her work uniform, she fidgeted while words tumbled out of her mouth. Small details first, until she got into financial needs, family dynamics and more. She just needed someone to know.

These instances happen all the time, every day in different ways. They are like a song that’s been put on repeat, where the melody stays the same but the lyrics change every time the song replays. People are desperate to hear the melody of Jesus’ grace meet the rhythms of their stories, and so many of these people don’t even know where to begin to look. We as Christ followers have the privilege of pointing them in the right direction. We have the honor of letting them know there is Someone far greater than us they can look to. We have the responsibility of bringing that sweet grace-of-Jesus melody, lining it up with their own personal lyrics and allowing them the opportunity to meet Christ with their own individual song.

That’s why ministry is what I do every day. If ministry were limited to one day a week, it would never be enough. Hope poured out one day a week would be like a leaking faucet instead of a gushing waterfall…and God has a gushing waterfall of faith, hope and love to flood the lives of his children. Thing is, He often uses people to do it. Through His grace and our willingness—the need, desire and the desperation every person has for Jesus Christ can be met.

Before ministry was called ministry, it was called serving. And serving is something every believer is selected for. A little breakdown for you:

In Mark 9:35, Jesus is talking to His disciples (also known as His “personal followers”). Modern day, that could be you and me. He’s chastising them really, but that’s for another post. He says, “If anyone would be first, he must be last of all and servant of all.” Back when the Bible wasn’t in English yet, servant was “diakonos”. You know how “diakonos” translates? It literally means to thoroughly raise up dust by moving in a hurry, and so to minister. Further, it translates to hasten after, pursue. So Jesus calls His followers to serve all and not just serve all, but pursue all hastily, so much so that His followers kick up dust as they move along.

The same version of “serve” is used in John 12:26 as well. Jesus says, “If anyone serves me, he must follow me; and where I am, there will my servant be also. If anyone serves me, the Father will honor him.” So I do ministry every day because the need is great. There isn’t a part-time need for God and I’m not His part-time follower. But I also do it every day because I want to follow Jesus. I want to be where He is, and I want to be honored by my heavenly Father. That means serving Jesus, which then means serving others.

We’re all similar to that nervous girl and the older woman I mentioned before. We all have a story, a past, pain, fear, questions and more. Those who don’t know Christ (and many who do) take their entire story to others, hoping to find answers. But we who know Jesus know where the true answer lies…In Him. We get to serve Him by becoming like Him, serving like Jesus did and pointing those we encounter to Him. And we get to do it wherever we find ourselves—our jobs, our gyms, in restaurants and anywhere else—every day. 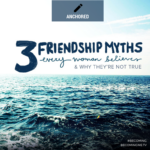 3 Friendship Myths Every Woman Believes & Why They’re Not TrueAnchored 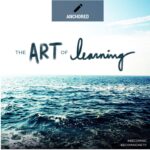 The Art of LearningAmanda Zecher, Anchored