Ladies, there’s a little bit of Amelia Earhart in all of us––and I’m not talking about just having a soft spot for bomber jackets (though I am totally guilty of that). It’s the part of us that dreams of accomplishing something significant, being recognized for who we are and influencing the world in a memorable way.

Amelia may an icon in history, but she’s also a woman with a story. Though we celebrate her accomplishments in aviation, and marvel at the mystery of her disappearance, while learning her story I discovered three stages of her life that we can relate to and find encouragement in.

During her first ride in an airplane, a spark ignited in Amelia that set her passion and career ablaze. As one biography put it:

“Earhart immersed herself in learning to fly. She read everything she could find on flying and spent much of her time at the airfield. She cropped her hair short, in the style of other women aviators. Worried what the other, more experienced pilots might think of her, she even slept in her new leather jacket for three nights to give it a more ‘worn’ look.”

I don’t know about you, but I’ve experienced this. When that dream for your life ignites, it can consume our time, energy, thoughts, and everything we have at our disposal to make it come to pass. When we have a vision for our life, we have something driving us.

Maybe today you need a fresh dream in your heart or a vision for your life. Thankfully, God is in the business of divine inspiration. He tells us in Jeremiah 29:11, “For I know the plans I have for you… They are plans for good and not for disaster, to give you a future and a hope.” We can go to God and ask Him to show us those plans for our life. He won’t us reveal every step in the process, but even a glimpse of the future and hope he has in store for us can fuel us with purpose and passion that inspires our every step.

When we dream audaciously, it’s easy to feel discouraged along the way. Experiencing friction, challenge, or disappointment on the journey is a part of life, but the important thing is that we don’t allow that to keep us from moving forward. In Amelia’s early career, she was invited to be the first woman to fly across the Atlantic—as a passenger. Even though she was an experienced pilot, the culture she lived in felt it was too dangerous a feat for a woman to fly across alone. Her biography puts it this way:

“Due to the weather, Stultz did all the flying. Even though this was the agreed upon arrangement, Earhart later confided that she felt she ‘was just baggage, like a sack of potatoes.’ Then she added, ‘… maybe someday I’ll try it alone.’”

The world may make you feel like a write-off while in pursuit of your dreams, but don’t buy into the lie. Amelia was honest in how she felt, but she didn’t let that define her dream. Instead, she allowed what was probably a low moment to become a pivot point that led to a series of record-setting flights.

Even in the top of her career, Amelia still dealt with comparison. Her biography explains how “The press dubbed her “Lady Lindy,” a derivative of the “Lucky Lind,” nickname for Charles Lindbergh”, her proceeded at flying around the world. Amelia wanted to be set apart; to set a new standard for women pursuing their dreams in a culture dominated by men. I bet this nickname got under her skin, but it sure didn’t stop her. She was determined to take on the challenge until she was recognized in a league of her own. Sometimes it seems like we’re living in the shadow of other peoples’ accomplishments. Know that God’s plan for you is unique. He crafted it as an original with his infinite creativity and wisdom. The world needs you––specifically as God has created you to be. Ditch the comparison and allow God to be the primary influence on your becoming journey. It’s then that we get to really influence the world.

“For years she had sewn her own clothes, and now she contributed her input to a new line of women’s fashion that embodied a sleek and purposeful, yet feminine, look.”

Starting in her early career and lasting throughout her journey, Amelia did her own thing until her world caught up. From fashion influence to women working in aviation to generations of people drawing inspiration from her story, Amelia had incredible influence. And a life of influence is the life we’re called to live. It isn’t about falling in line with the latest trends, habits, or standards. We are called to rise above and carry the life-changing presence of God into the room. Romans 12:2 says, “Don’t copy the behavior and customs of this world, but let God transform you into a new person by changing the way you think. Then you will learn to know God’s will for you, which is good and pleasing and perfect.”

God’s will for all of us is that we create a wave of influence that draws others to Himself. We are invited to leave a legacy built upon how we carry ourselves, pursue our dreams, and relate to others. Matthew 5:16 says, “In the same way, let your light shine before others, that they may see your good deeds and glorify your Father in heaven.” Amelia shined with talent, audacity, and determination. Look at the unique gift mix and blend of characteristics that God has wired you with. As you engage those things on the journey, you’ll be sure to shine with incredible influence, too.

As we take a look at what it means to live a life that leaves a legacy, I pray that your heart is filled with confidence and courage. Stories like Amelia, who emerged from the standards of society and the shadow of others to shatter the limits and inspire the world, are meant to inspire us to do the same. Take hold of your dream, commit to the journey, and become the history maker you were born to be. 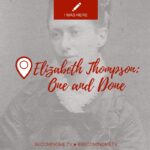 Elizabeth Thompson: One And DoneHeather Snodgrass, I Was Here 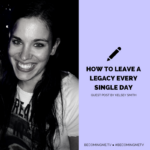 How To Leave A Legacy Every Single DayGuest Posts, I Was Here