dear me… take the wave.

I’ve heard it said that when life gives you lemons you should squeeze one in your hair and then go surfing… Some of the best advice I have heard because life is a lot like surfing.

Do you remember the summer of 2007 when Mom and Dad dropped you off for a week of surf camp in La Jolla Beach, California? You were stoked for a couple of reasons. First, you were finally going to surf in CALIFORNIA and second, you were going to meet BETHANY HAMILITON. But little did you know that one afternoon at that surf camp was going to change the way you looked at life.

At camp, you along with other kids, started learning by riding the white wash. You were having fun. You were surfing, but then your counselor swam up to you and said, “Ok, Katie, it’s time.” You were confused and asked, “Time for what?” and she responded, “It’s time to paddle to the outside and catch a bigger wave.” You were terrified. You were comfortable where you were. You were able to catch all the waves you were paddling for. You weren’t wiping out—a.k.a. in your mind, you weren’t failing. But going to the outside, that was new, that had the opportunity to wipe out, to fail. But your counselor wouldn’t let you settle because she knew something that you didn’t. She knew that paddling to the outside was the next step to growth. The next step of becoming a better surfer. So you went. You paddled to outside and let me remind you, it was hard. You had to go through the waves that were rushing towards you. You had to paddle hard, stay focused, and keep going even when some waves would push you back towards the shore and you lost all of your forward progress. But then you made it. But now that you had made it to the outside, you had no idea what to do. You felt trapped because the only way to go back to the shore was to try and catch one of these waves but that felt too scary. You started to look around and saw other surfers who knew what they were doing and it made you feel out of place, but your counselor popped up next to you. She didn’t make you go out alone, she was right beside you to guide you and help you catch your first big wave. She looked out to the horizon and pointed at how the ocean was beginning to ripple towards us. She told you that a swell was building and waves were coming. She helped you turn your board around and get in the right position to catch a wave. She said, “Ok, Katie, when I tell you to start paddling, I want you to paddle like you’ve never paddled before and don’t stop.” “But how am I supposed to know when to stand up?” you asked. She smiled and said, “Trust me, you will know, because you will feel it.” All of a sudden you heard her tell you to start paddling, so you did. You paddled harder than you ever have before and then you felt it. You felt the wave pick your board up and start moving you forward and you knew that it was time to stand. You placed your hands on either side of the board and pushed yourself to your feet and as you stood on your board, you felt the board drop down the face of the wave and keep going. For a split second, your heart dropped with the board, but then it soared as you felt the wave carrying you forward. You rode that wave all the way back to the beach and then turned to look back to the outside and you saw your counselor throw her fist in the air in victory.

That day forever changed how you looked at new challenges and opportunities. You experienced what it felt like to take a risk and move out of your comfort zone and paddle to the outside where the bigger waves are waiting. That is what life is about. You are on this journey of becoming who God made you to be and that means you need to be sitting in the outside, the place where you can sit on your board and pause and see where you just came from—you can see the result of your hard work and perseverance through the waves, and you can then look to the horizon and see possibilities rising like the sets of waves building. Some of those waves rising in the distance are going to look too big to try and you might be afraid of wiping out, but you just need to paddle. Be brave and take the wave. I’ll let you in on a little secret, some of those waves that you risk paddling for are going to make you wipe out. They’ve held you under and you’re even going to break your nose from one, but with each wipe out, you do get stronger. 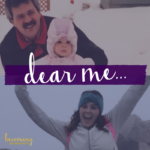 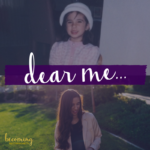 dear me… there is a Spring season right around the corner.Ana Munoz, dear me...