How Christine Caine Invited Me Into A Bigger Story

I sat in front of the mirror applying my makeup. An early morning, I was just trying to find some noise to fill the space between waking up and rushing out the door. And suddenly, my fresh coat of mascara found itself in need of some TLC as my eyes puddled with water and fixed on my computer screen. It was too early in the morning to already be crying, but my typical morning routine was interrupted as Christine Caine’s story found mine. And I (so far) am forever changed.

For years I wore my past like a badge of honor. With twisted pride I’d share details, so those around me would know just how strong, resilient and brave I was. Telling others gave me the opportunity to keep the memories alive and remain close to all that had happened. My past was like a security blanket–easy to run back to and hide under. There was no risk in staying close to my past, my identity was wrapped up in it and I remained comforted by the familiarity of it all.

I’d often listen to Christine Caine and always appreciated what she had to say. However, everything changed when I finally heard her tell her story. It was in the middle of one of her messages and I don’t even remember which one anymore. While my story isn’t nearly the same as Christine’s, it reflects the brokenness all of us experience at one point or another. Thing is, where I used to spend a good deal of time dwelling on the details of my story, she spent her time dealing with hers, laying her story at the feet of Jesus and moving forward.

Hearing Christine’s story made me realize that hurt really can be healed, and not just healed, but made new. She’s a living, breathing example of the power, hope and freedom we have access to in Christ.

Christine’s story left me with no excuses. I realized I had to stop wishing for a different past. I realized I had to stop resenting the present circumstances caused by that past. Her story showed me that it isn’t necessary to hide and that beauty without brokenness isn’t really beauty at all. Christine’s act of not being defined by the circumstances she was born into provided a very tangible and empowering example for me.

That’s what Christine Caine’s story did for me. It left me different than I was when I’d woken up that morning. In just moments her story stretched me to see things differently, to grab hold of courage and be willing to leave some stuff behind. In moments she inched me closer to Christ, to identify with Him instead of my surroundings. She invited me into a story that’s bigger than my own.

What story has helped you grow in your own life? Was it a story you heard, read or saw?

3 Reasons Why Your Dreams Are Too SmallAmy Poole, Your Story Matters 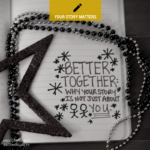 Better Together: Why Your Story Is Not Just About YouAmy Poole, Your Story Matters