How To Be Expectant For Jesus

Growing up a pastor’s kid, I’ve often heard my Dad lead church staff & our church family saying this: “If God doesn’t show up, it’s game over, lights out.” Seeing this consistent model of complete, open-handed, dependent trust in God to show up, has always encouraged me to be expectant for Jesus; however, lately I’m learning what that means on a personal level…

In Luke 2, a group of shepherds were going about their every day, ordinary lives when something crazy out-of-the-ordinary happened. I can just imagine them tending the sheep, maybe making small talk, and then boom an Angel drops in on their conversation and tells them about this newborn baby who was going to save the world. They listened, were a tiny bit terrified (or maybe a lot), experienced an epic worship moment with a whole host of angels, and then were left blinking, looking at each other wondering “what just happened?!”

I imagine this present day in my every day, ordinary life. I’m going about my day, knocking out my Asana to-do list, when boom an Angel drops by my desk and tells me something crazy-awesome-out-of-the-ordinary is happening. I’d probably be a whole-lot terrified and wondering “what is happening?!”

I love what the shepherds did next. Luke 2:15 says, “When the angels had returned to heaven, the shepherds said to each other, ‘Let’s go to Bethlehem! Let’s see this thing that has happened, which the Lord has told us about.'” They heard God was up to something and immediately went into action…they went to see with their own eyes what God was doing.

When I hear God’s up to something and I see Him at work, I want to live with the posture the shepherds had that starry night—I want to move. I want to spring into action, take that next step, and go see with my own eyes what God is doing. I don’t want to just hear about it second-hand. I want to be up in on the story of Hope that God is writing all over the world.

“They hurried to the village and found Mary and Joseph. And there was the baby, lying in the manger. After seeing him, the shepherds told everyone what had happened and what the angel had said to them about this child. All who heard the shepherds’ story were astonished, but Mary kept all these things in her heart and thought about them often. The shepherds went back to their flocks, glorifying and praising God for all they had heard and seen. It was just as the angel had told them.” Luke 2:16-20

The shepherds went to see what God was doing, saw the baby Jesus with their own eyes, and then went and told everyone what they had seen. And after sharing their experience? They went back about their every day, ordinary lives…but this time with a totally different posture. Now, in their every day, ordinary work they were “glorifying and praising God for all they had heard and seen” (Luke 2:20).

That’s how I want to live. I want to live hearing from God, but not just hearing…expecting Him to show up. I want to be in the middle of my every day, ordinary work and see how God is moving all around me with my own two eyes. I want to see it, and then share it with those around me. And I don’t want to ever walk away the same. I want how God shows up to change me from the inside-out, causing me to walk back to the desk of life glorifying and praising God…and then expecting Him to show up again and again and again.

You see, I think—and this is just what I think—that the Angel showed up to those shepherds that night because they were expecting something to happen in their world. They were ready for God to move, to show up, to save His people. And because they had expectant hearts, they were able to hear that God was up to something, go see it for themselves, share the Hope of Jesus with everyone around them, and then never live the same again.

That’s how I want to live…expectant for God to move, to show up here in my every day, ordinary life, for me to get in on it and see it for myself, share the Hope I’ve experienced in Jesus with those around me, and never, ever be the same. 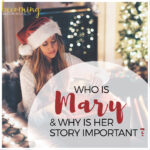 Who Is Mary & Why Is Her Story ImportantAmanda Zecher, The Wonder Of Advent 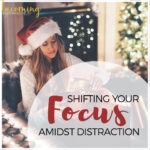 Shifting Your Focus Amidst DistractionAllie Reefer, The Wonder Of Advent