Shifting Your Focus Amidst Distraction

In the middle of the presents, lights, songs, parties, and other distractions, how can we keep our focus on Christ and His kingdom through this Christmas season? It’s a question Christians have been asking for ages. And I think that the answer lies in the story that led to the celebration—the birth of Christ.

Christ’s birth came in a way that was totally opposite to most of our Christmas celebrations—quiet, humble, and relatively unnoticed. That’s not to say that we shouldn’t celebrate the way we do, but it does say something about how we can shift our focus back to Christ. When Jesus was born, a lot of people missed it. They were looking for the Messiah, but they were distracted by so many things that kept them from focusing on who He really was. The Messiah they were looking for wasn’t a baby who grew up teaching Scripture and performed His first miracle at a wedding celebration. They expected a strong hero, a warrior, a politician even. They were focused on their own surroundings, living in a hostile empire, persecuted and oppressed. They let chaos, pain, religion, fear, and their own sense of entitlement distract them from the miracle of Christ’s birth. But three groups of people were focused and poised in a way that they got to experience Christ’s birth in its fullness: Mary and Joseph, the shepherds, and the wise men.

Mary and Joseph may seem obvious, because they were Jesus’s parents here on earth, but that didn’t mean they were free from distractions. Mary’s life was so focused on God that He chose her to bear His only Son. She was unwed and pregnant, but she continued to keep her eyes on God, not letting the distractions of her pending marriage, humiliation, or shame get in the way of God’s plan. Similarly, Joseph could have chosen to be distracted by his immediate circumstances—his pregnant fiancée, the ongoing exile, the shame and confusion. Instead, he chose to focus on God and trust in His plan and goodness. Both of them listened, obeyed, and followed through.

In the middle of the night watch, a group of shepherds were suddenly surrounded by angels singing and telling them that the Messiah is born. They felt fear—but they didn’t let it distract them from the message of the angels: that the Savior they had been waiting for was born. The shepherds didn’t let their fear stop them, and they didn’t let their low status in society keep them away. God’s most glorious message of His Son’s birth was reserved for some of the least “glorious” people—but he knew they would pay attention. He knew they would focus on Christ. The shepherds stayed humble and were open to God’s Word.

The story of the Magi is one of my favorites—even though it’s also one of the least detailed. What we do know is that this group of men traveled from a country in the East, bringing lavish gifts for Christ, who they recognized as the Messiah. Many suggest that these men were foreign scientists and scholars. We know they had studied the Scriptures and prophets pointing to Jesus. They weren’t looking for a politician or a future king or a young warrior; they looked for a child, and they knew that He was worthy of their worship even then. They didn’t let any expectations distract them from the truth. The wise men were able to focus on who Christ truly was because of their deep knowledge and understanding of God’s Word and their joyful anticipation of Christ’s birth.

We don’t have a star to follow or dreams of angels or a heavenly choir in the sky outside our windows. What we do have is this whole miraculous, amazing story of Christ coming to us in the form of a baby, born solely for the purpose of our salvation. What we have is God’s Word—centuries of prophets, songs, and stories that all point to Christ’s story. We have the accounts of God reaching out to the most unlikely people on the most important night in the history of creation, the turning point in God’s story of redemption for His people. We have songs praising God and the work that He did through Christ’s birth and the cross.

So this Christmas, don’t let all the distractions get in the way of remembering what we’re celebrating. By focusing on Christ, we can bring true hope and joy to this season. Christmas is not just about Jesus’s birth but the redemption that His life, death, and resurrection brought us, beginning on the night He was born. 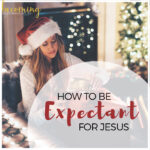 How To Be Expectant For JesusEmily Cummins, The Wonder Of Advent 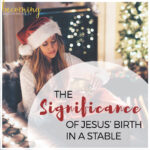 The Significance of Jesus’ Birth In A StableHeather Snodgrass, The Wonder Of Advent