It’s Not Too Late To Embrace Becoming Who God Made You To Be: How To Start Where You’re At Today

Have you ever tried to kick a bad habit? You know, the one that you’ve dealt with as long as you can remember? I began to bite my nails at age 5. Growing up, that was a habit I just could not kick. It was so addicting to me, that it was almost like a natural instinct. I remember admiring how my friends had such long, beautifully-painted nails because they took care of them. I’d go to the nail salon and get acrylic nails from time to time, trying to convince myself that I had beautiful nails too, but it just didn’t feel the same.

Fast forward to a year and a half ago, when I decided enough was enough. I was 21, and I wanted pretty hands. I wanted to be able to show off my wedding ring without being embarrassed about my stubby little nails. Although for the past 16 years of my life, it was completely natural for me to bite my nails every single day, I chose to become the girl I wanted to be. I chose to grow those little nails out, not knowing how they would look but wanting to at least give it my best effort. It was a difficult process, I must say. However, as I continued to think about becoming the girl I dreamed and desired to be for so long, it became easier to keep going. I wasn’t going to allow the fact that I was a nail-biter for 16 years to keep me in that lifestyle the rest of my life. Every day, my nails grew longer and before I knew it, it had been a year of long, pretty, painted nails. My past began to fade away from my mind as I realized that this was my new normal – I could have long nails for the rest of my life if I wanted to.

I know that my victory over nail-biting story sounds sort of cheesy, but it reminds me of something much, much bigger. I believe that many of us have a desire to be the girl God wants us to be, but we look at our past and let it determine whether we will pursue becoming that girl or not. There are so many desires and dreams God places on our hearts, but often we tell ourselves that we are too late or too far gone. If we feel called to step out and join a ministry, we look back on how we failed in other big moments throughout the years and hesitate moving forward into what we should be doing. If we’ve struggled with our weight growing up, we may tend to tell ourselves that we will always struggle and therefore never develop a healthy home and lifestyle. We let who we’ve been keep us from who we are called to become. We believe the lie that our past has disqualified us or will only set us up for future failure.

I want to encourage you today with this truth: it’s not too late to pursue who God is calling you to be. No matter where you are in life, God is inviting you to grow with Him and bloom into who He desires you to be. The best way to begin this process of becoming who God made you to be is to simply acknowledge His goodness and mercy. He has good thoughts toward us and good plans for us, all the while putting our past behind us with His mercy. We serve a God that throws every sin of ours into a sea of forgetfulness, granting us a fresh start each and every day. 2 Corinthians 5:17 says, “Therefore, if anyone is in Christ, He is a new creation. The old has passed away; behold, the new has come”. God doesn’t let our past disqualify us from becoming who He wants us to be. He covers us in His grace, making us able to become greater than we could ever imagine. It just takes our obedience – our sensitivity to His call to become who He wants us to be. He desires us to be willing at any moment, any age or any season to give Him all of us so we can become who we’re made to be, regardless of how useless or incapable we feel. He’s waiting on us, ready to plant, prune and water us. When we say yes to Him, we start the process. Little by little, we grow. We may not see progress right away, but after an amount of time passes, we’ll see how far we’ve come and be thankful that we started when we did rather than never starting at all. It’s all about choosing to trust that He can take our faith and obedience a long way. Even if we’ve messed up or had a late start, it’s worth it to pursue becoming who God wants us to be because we know that eventually, we will bloom.

Whether you’re feeling the nudge to develop self-control over some bad habits or feeling called to step into some things that seem intimidating, be obedient. Accept God’s grace along the way, recognizing that we are all human – we are bound to make mistakes. Jesus came for the imperfect people. His power is made perfect in weakness, meaning that when we offer up ourselves to Him, however broken or fallen short, He is able to do mighty things in us. So go ahead, sweet girl. Say yes. Don’t let who you’ve been keep you from the future God has for you. Embrace the new mercies God has given you today and walk in obedience, trusting that He will help you become who He desires you to be. You don’t have to be stuck being the same old you. You can change today. You can be obedient today. You can become who God wants you to be today. Just begin.

Brooklyn is a lover of Jesus and an advocate of intimacy with Him. Sharing her heart with others is one of her greatest passions. She does this through coffee dates and writing in her blog. She is also currently writing her first book, which she hopes to have out later next year. In addition to these passions, she loves leading worship at the church she and her husband attend in Sacramento, CA. She is married to her high school sweetheart and is enjoying being a newlywed, but is also looking forward to the future God has in store for them. She loves meeting new people and getting to know their hearts, so feel free reach out and say hello sometime! 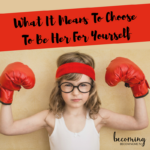 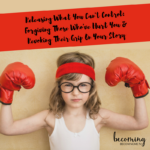 Releasing What You Can’t Control: Forgiving Those Who’ve Hurt You & Revoking Their Grip On Your StoryAllie Reefer, Choose To Be Her