Releasing What You Can’t Control: Forgiving Those Who’ve Hurt You & Revoking Their Grip On Your Story

Some things are hard to forget. It would take me five minutes to remember what I ate for lunch yesterday, but I can picture the vivid details of the day a classmate threw dirt in my face in 4th grade. I don’t remember my classes from 7th grade, but I remember the guy who slammed his locker door in my face that year, calling me “goody two-shoes.” I can’t remember all the things I did with my friends in school, but I remember them trying to start the nickname “Barbie” for me because they said I acted “blonde” and ditzy. (Side note, my hair IS blonde now, so trust me when I say that hair color is NO indication of someone’s intelligence or personality!)

The moments that hurt us, that cut deep into our identities, are the ones that stick with us the longest. We may move past those people, years, seasons, and problems, but the scars remain and continue to shape how we go forward.

Somehow, in my friend groups, I’ve always earned the “klutz” title. I can’t say it’s totally unfounded–I’ll be the first to admit that my body isn’t exactly coordinated. Klutz slowly turns into ditz, and in most cases, I became the brunt of jokes for the group. The first few times it happened in my life, I didn’t know how to react. I defended myself; I snapped back; I walked away. Eventually, after enough times, I started beating people to the punch. I started making the jokes first. It was my way of putting up walls. You can’t make me feel bad about myself because I already think it’s funny.

The problem was that people stopped taking me seriously. In their eyes, I went from a smart, talented, 4.0 GPA friend to their friend that would inevitably trip over every piece of furniture in the room and say something dumb in the conversation. My story among my peers had drastically turned from the story I knew for myself. Ultimately, it led me to feel disrespected and belittled by people who simply thought they were going along with my jokes. I let the hurts of my past shape my future, and I continued to live the story other people placed on me.

Part of the change in my story came with maturity and age–as my friends got older, they began to let go of the petty jokes. But a lot of it just changed when I left those people. With new friends, I was able to craft my own story carefully so that they would only see me as I wanted them to see me; but that didn’t leave room for vulnerability or deep relationships. I still had scars, hanging on for dear life, forcing me away from any relationship that could potentially hurt.

A few key things changed my perspective and helped me move on from these hurts. One of those things was a book by Donald Miller called A Million Miles in a Thousand Years. In it, Miller talks about how we shape our stories and why we tell them. I realized that I wasn’t living a good story. The story I was choosing was not the best one, it was not a story that proclaimed Christ’s victory and love in my life. Miller says in his book, “A story is based on what people think is important, so when we live a story, we are telling people around us what we think is important.” I was living a story that I thought other people wanted, the one that caused the least hurt and the least vulnerability.  But as we see throughout the hundreds of stories in the Bible, the best stories are the ones God speaks through in the midst of hurt, challenges, and defeat–the stories that no one could live out but for the grace of God.

The other thing that I realized is the true power and importance of forgiveness. Jesus commands us to forgive, but it’s not just to make other people feel better about what they did to us. When we hold onto hurt and bitterness, we ignore the grace that has been extended to us by God, shutting it out and shutting ourselves in. Forgiveness frees us to live a life like Christ, filled with grace and mercy for those around us. It allows us to move forward–the baggage doesn’t go away, but Christ picks it up and carries the burden for us. God forgives us and loves to show us mercy and goodness: “Who is a God like you, who pardons sin and forgives the transgression of the remnant of his inheritance? You do not stay angry forever but delight to show mercy. You will again have compassion on us; you will tread our sins underfoot and hurl all our iniquities into the depths of the sea” (Micah 7:18-19 NIV).

Through forgiving others of the hurt that they’ve caused, we release their grip on our stories. When we choose to forgive, we choose to move forward in the story that Christ is creating for us, a story shaped by grace, mercy, justice, compassion, and redemption. 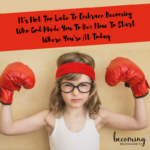 It’s Not Too Late To Embrace Becoming Who God Made You To Be: How To Start Where You’re At TodayBrooklyn Oseguera, Choose To Be Her 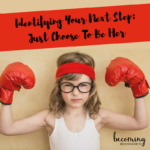