Shake It Off: When Your Story Doesn’t Unpack How You Hoped

It seems as though every time a season of life is coming to a close (especially graduation seasons), you become bombarded with the question of “what’s next?”

I know when I used to answer I felt so sure of what I was saying. I was confident that what I was speaking was 110% true. I just knew exactly what was going to happen to and for me. As I’ve grown, I have come to realize how even though I want to claim that I know what’s next, I usually don’t.

To be honest, I’ve learned this lesson mainly though hoping for something specific and then watching my story unpack in a very different way than I’d hoped.

I find having hopes and dreams for the future are important. Goals are important. They help steer me in a specific direction. But sometimes those goals, hopes, and dreams cause me to become inflexible. When the exact things I wanted for my future didn’t come to fruition in the timeframe or way I expected, I began to blame others and even God. I began to envy my friend’s lives and wish mine was different.

But what I never realized is when I was constructing my future in my mind I rarely consulted my heavenly Father about His plans. I watched the lives around me and built something that was made for them and not for me. Jeremiah 29:11 reminds us as we are becoming who God made us to be that He has a promise for us—to provide us with a hope and a future.

My plans are finite and usually geared to what would make me happy or more comfortable. These plans have one focus—me. All the while, God’s plan is one that has a fullness and ability to evoke worldwide change. This is not because of me though, but because of Him. I cannot create worldwide change on my own. His plan is not one of singular (selfish) focus but one that takes into consideration who Jesus called our “neighbors.”

When I graduated with my Master’s, I was constantly asked, “So what is next?” In reality, I only knew what I didn’t want. I did not want to move back to my hometown. I felt it was a step backwards. I felt it was somehow beneath me or that it would undo all I had worked for while I lived away.

Of course, somehow I ended up moving back home. I was bummed at first. I was watching my story become the exact thing I hadn’t wanted.

So now, I want to remind you that your story might not unpack the way you dreamed. But it just might lead you to exactly where God has always been calling you. While you might not know why, how, or when your story is going to unfold, you can be certain of this: God has a plan to give you a hope and a future and it is one of joy.

Danielle Mercier lives in Ocala, Florida. She is a third grade teacher at a local school. She loves gardening, reading, laughing at memes online, and spending time at Disney. Danielle is passionate about equipping the next generation with the tools they need to become who God has made them to be. 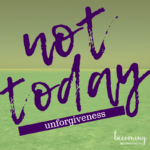 Not Today: UnforgivenessDanielle Mercier, Not Today 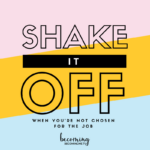 Shake It Off: When You’re Not Chosen for the JobKelsey Smith, Shake It Off