When You’ve Been Betrayed

You’ve heard it before: girl likes boy, boy likes girl, boy and girl date, boy breaks up with girl, boy dates girl’s best friend. Well, maybe you haven’t heard it before, but I sure have. When I was in college, I was best friends with a girl named Kayla (not her real name, for the sake of protecting her identity), and we did everything together. When we were sophomores, we met a guy named Cody (again, name changed), and the three of us became fast friends. You can guess what happened next. Cody and I started spending more time alone together and talking on the phone for hours, and soon we were an item. Happiness and bliss and all of that.

I couldn’t tell you exactly when it happened, but a number of months later, he ended things with me. Heart = broken. It was summertime at that point, and about a week or so later, I left for a week of camp, where I was counseling through my church. Through a series of events while at camp, I soon learned that these two dear friends of mine had started dating behind my back. When they knew I had found out, they apologized profusely for it, but oh man was I hurt.

Kayla was my very best friend and she had gone behind my back and dated the boy I’d just had my heart broken by. It was the first time I’d ever been betrayed and it sucked. However, I’d heard so many stories about best friends splitting up because of boys and I wasn’t about to let Kayla and I become a part of that stat, so I told myself to suck it up and just forgive her.

And I did, I forgave her. But not really. I made myself believe it didn’t bother me when I saw them flirting and holding hands. I told her she could tell me anything she wanted to and it wouldn’t hurt me. I consoled her when he eventually broke up with her.

But over those weeks and months, I slowly found myself resenting her more and more. When she told me he had broken up with her, I secretly rejoiced. I was so happy. And relieved. And that’s when I knew I hadn’t actually forgiven her.

In her book, Rising Strong, Brene Brown talks about the crucial importance of facing your pain and letting yourself feel the hurt or forgiveness is impossible. In my overwhelming desire to not become a statistic, I failed to let myself feel the pain of what Kayla had done to me, and the pain turned to anger and resentment. When I finally realized what I’d done, our friendship was holding itself together by threads and honestly, I wasn’t sure if I even wanted to fix it.

Betrayal sucks. It’s not fun at all to be stabbed in the back by someone you thought cared about you. Holding onto that anger won’t hurt anyone except you, though. If you want to be able to move on fully and live your life joyfully, you have to eventually forgive the person who betrayed you. And unfortunately, as Brene Brown says, forgiveness can only come once you’ve allowed yourself to face the pain.

There’s a pretty amazing and terrible example of betrayal in the Bible, when Judas betrays Jesus. Judas was one of Jesus’ disciples… one of His closest friends… and he turned Jesus over to be killed. Killed! (It’s a good thing I’m not Jesus because if I was, I would never forgive Judas.) I think one thing we tend to overlook when reading Bible stories, is that Jesus was human in every way that we are. Although the Bible doesn’t go into detail about how Jesus handled this betrayal emotionally, it does say that He can empathize with us because He’s faced all the same testings that we have (Hebrews 4:15). So you can imagine how incredibly saddened and hurt He was by one of His best friends’ rejections of Him.

I’m not sure what has or hasn’t happened in your life to cause you pain, but I can almost guarantee you’ve experienced betrayal in some form or another. Be comforted by the fact that Jesus has, too, and He’s felt what you are. In moving past betrayal, the most important thing you can do is 1) face your pain, and 2) forgive. Don’t let your inability to forgive ruin your relationships, like I did.

Heather Snodgrass lives in Nashville with her husband, Taylor. Still trying to figure this whole marriage thing out, Heather is passionate about sharing what she’s learned about love and life with others however she can. 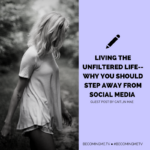 Living the Unfiltered Life—Why You Should Step Away from Social Media Guest Posts, Let's Talk About Change 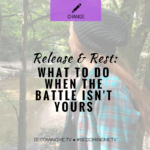 Release & Rest: What To Do When The Battle Isn’t YoursAmanda Zecher, Let's Talk About Change