If you follow @taylorswift on Instagram, yesterday you saw an excited video sharing stats on her new album, 1989. Before a personal car jam session, she said, “Industry experts predicted 1989 would sell 650k first week. You went and bought 1.287 million albums. AND IT’S GOT ME LIKE: (insert jam sesh now).”

Yep. I was one of those 1.287 million. And yep, I’ve been dancing to 1989 for the past week non-stop. So why do we obviously not-so-secretly love T. Swift’s new project?

Watching others become more of themselves inspires me. And it’s inspiring some cool dance moves this week. Well friends, this girl is getting back to grooving to 1989. Today, let’s celebrate becoming the women God made us to be. 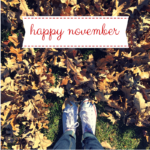